Over the last three years, Microsoft Corporation (NASDAQ:MSFT) [stockdata ticker=”MSFT”] has been hoarding cash. While the Federal Reserve has kept interest rates to a record low, 0.25 percent, it is a valid question to ask that why a technology company is hoarding cash for such a long period of time. After all, Microsoft isn’t making any significant return on the US$ 80 billion cash reserve it seems to have accumulated. 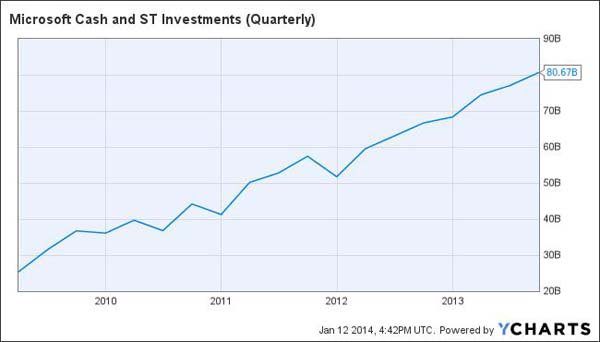 One possible reason could be a planned acquisition of a large company. Back in September 2013, it did buy out Nokia’s mobile phone business for US$ 7.2 billion. Yet, the amount of cash it has on the balance sheet is astonishing. Actually, the company currently has almost three times the cash compared to what the U.S. Federal Government has on hand!

A cynical answer would be to avoid paying taxes to the Internal Revenue Service (IRS). U.S. corporate tax runs as high as 35 percent when companies bring their revenues to the United States, which is generated abroad though overseas subsidiaries. Based on dual-taxation treaties, U.S. companies get tax credits on any tax paid to foreign governments. However, as the U.S. corporate tax is one of the highest in the world, they end up paying a much higher premium if they choose to bring home the extra cash sitting in an offshore account.

The U.S. economy is growing amid stimulus packages such as quantitative easing and due to a favorable expansionary monetary policy. However, the technology sector in the U.S. hardly needs to make massive investments beside pumping money into research and development. Any manufacturing operation can be outsourced to emerging economies where labor cost is a lot less compared to the United States. Also, cash parked in high growth economies where interest rates are much higher offers a lot of interest earnings. The incentive to keep the pile of cash for Microsoft and other companies abroad makes a perfect economic sense. It makes so much sense that Microsoft actually borrowed US$ 2.25 billion in unsecured debt back in 2011, when the company already had US$ 40 billion in cash reserve!

When large scale companies like Microsoft (NASDAQ:MSFT) [stockdata ticker=”MSFT”] don’t choose to issue dividends, and instead hoard cash abroad to save on taxes, it effectively increases the return on equity and help with its stock price appreciation. Meaning, it maximizes the shareholder value, regardless of the fact that profits are coming from actual operating revenue or from savings on tax. In fact, borrowing dollars from the U.S. at lower interest rate to invest abroad makes blue chip companies more like an offshore hedge fund than an actual American business.

As long as the United States government will keep taxes high, and flood the money market with a cheap U.S. dollar, companies like Microsoft will keep hoarding cash. It is just textbook finance.