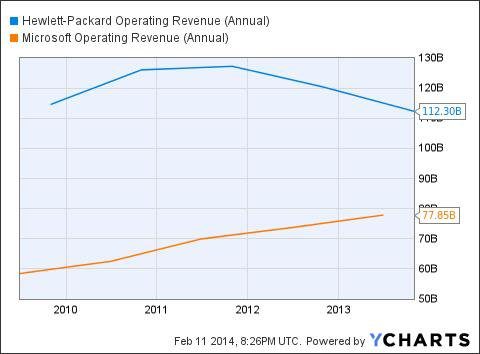 If we carefully consider a few recent initiatives from Hewlett Packard, it is apparent that this PC giant is undergoing a shift towards Google away from Microsoft, which can spread like wildfire to other PC manufacturers and seriously damage Microsoft’s revenues in the long run.

During January, HP initiated the revival of Windows 7 operating system “by popular demand.” Analysts are describing this move by HP as siding with critics who are prescribing that Windows 7, the older version, is indeed a better product compared to Microsoft’s latest offering, the Windows 8 and 8.x operating systems. When Microsoft is pushing hard to phase out Windows XP and trying to get consumers to adapt to its latest Metro interface, HP’s decision to still ship Windows 7 loaded PCs is a real setback given that HP is the largest PC manufacturer in the domestic market.

As long as consumers have the option to buy “new” Windows 7 PCs, they will continue to use it. However, Microsoft’s plan with Windows 8 is to create an interface that will run on both mobile computing devices such as Tablets as well as on traditional personal computers. If consumers are not getting familiar with the Metro UI, Microsoft’s plan to penetrate the Mobile computing market will remain a shaky plan at best.

Moreover, Hewlett Packard picked Android to power its new line of Smartphones in January, which won’t help Microsoft at all to push its latest Windows mobile operating system in the emerging markets. Microsoft bought Nokia in order to sell low cost Windows mobile based Smartphones in places like India. If a major manufacturer like HP moves towards Android to market cheap phones in emerging markets, itseriously undermine the sales of low cost Windows phones.

Not only HP picked Android, it is also making Google’s Chrome OS based ChromeBook. In fact, there were three Chromebooks that HP delivered in 2013. At CES 2014, HP also revealed its plan to market an Android based all-in-one PC, instead of using the latest Windows 8 operating system.

As HP sees its revenues drop amid the declining popularity of traditional PCs, it is trying to compete for every penny in the growing mobile computing market, where Microsoft is getting its revenue growth.

Actions speak louder than words, but HP CEO Meg Whiteman actually called Microsoft a competitor. These minor, but eventful actions from HP is clearly indicating the fact that Microsoft, once only a software vendor, is becoming a competitor to HP as it slowly moves towards hardware manufacturing.