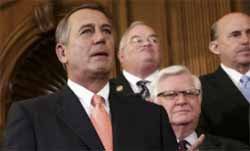 While the traditional wisdom is that if the US government were to endure a shutdown over stalled negotiations in Congress, the Republicans would end up bearing the brunt of the blame. However, recent statements by the White House indicate that they are the ones who are digging in their heels by refusing to negotiate.

Lest someone attribute Pfeiffer’s remark to something spoken in the heat of the moment, he also compared Republicans to arsonists as justification for why the White House did not feel it needed to negotiate with Congress over spending cuts.

“It’s not a negotiation if I show up at your house and say give me everything inside or I’m going to burn it down,” he said.

Senate Majority Leader Harry Reid has likewise said he has no intention of negotiating with Republicans over the issue.

The remarks by the administration and democratic members of Congress are similar to inflammatory statements they made during the previous debt ceiling debate in 2011.

On Aug. 1, 2011, Rep. Mike Doyle (D-PA.) speaking about members of the tea party caucus, reportedly said “We have negotiated with terrorists. This small group of terrorists has made it impossible to spend any money.”

Vice-President Joe Biden supposedly echoed the sentiment saying “They have acted like terrorists.” Biden has denied making the remark.

A few days before Doyle’s comments, former Ted Kennedy staffer, William Yeomans wrote “It has become commonplace to call the tea party faction in the House ‘hostage takers’, but now they have become full-blown terrorists.”

Sen. John McCain also took aim at the tea party calling members “hobbits.” At a recent town hall meeting, in Gilbert, Arizona McCain was asked to apologize for the statement. McCain said “I am sorry if I was misunderstood. I am not sorry for what I said, why should I, when it’s a fact?”

Froma Harrop, President of the National Conference of Editorial Writers, said “The tea party Republicans have engaged in economic terrorism against the United States–threatening to blow up the economy if they don’t get what they want. And like the al-Qaida bombers, what they want is delusional: the dream of restoring some fantasy caliphate.” She continued “Americans are not supposed to negotiate with terrorists, but that’s what Obama has been doing.”

Ironically, the NCEW had a project called Restoring Civility featured on its website. Harrop defended her column as being consistent with the NCEW project. “I see incivility as not letting other people speak their piece. It’s not about offering strong opinions. If someone’s opinion is fact-based, then it is permissible in civil discourse.”

Harrop stated that the references were accurate as “terrorism is not confined to physical attacks.” Harrop then referenced a recent news story in the Wall Street Journal reporting that the Pentagon considers computer sabotage from another country to be an act of war.

Harrop said “Blowing up the U.S. economy to make a point would be an even more serious attack, in my book.  And that’s what the tea party saboteurs were threatening. They are what they are.”

Rep. Ted Deutch (D-Fla.) said “tea party extremists really held this country hostage. Another Florida Democrat Rep. Alcee Hastings said “What we have witnessed in the past several weeks was hardly a negotiation, but rather the Republicans recklessly holding the full faith and credit of the United States hostage until they got everything they wanted and then some.”