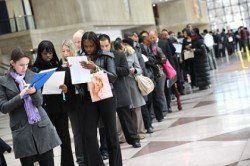 The unemployment rate rose in 30 states in the month of July. While the unemployment rate is up, employers in more than two-thirds of states have increased hiring, meaning that the rate is indicative of an increase in people seeking jobs and entering the workforce.

The Labor Department said yesterday that the unemployment rate fell in eight states and remained stagnant in 12 others. Hiring rose in 36 states, fell in 13 states, and did not change in Iowa.

The national unemployment rate rose to 6.2 percent in July, an increase from the 6.1 percent that was seen in June. Employers added 209,000 jobs in July.

“The reason the rate rose nationwide even as hiring increased is that more Americans launched job searches but didn’t find work. That lifted the number of unemployed. Still, the rise in people seeking jobs suggests they’re more optimistic about their prospects. The jobless aren’t counted as unemployed unless they’re actively seeking work,” reports the Associated Press.

The biggest job gain in the month of July was seen in Texas, which added 46,600 jobs overall. California and Michigan added 27,700 and 17,900 jobs respectively.

Regardless of the increase seen in the month of July, unemployment rates have improved significantly so far this year.

Despite the overall decent recovery seen in 2014 in terms of unemployment, millions of Americans have been struggling to get by since unemployment benefits ran out late last year.

Many have pushed Congress to extend unemployment benefits for those whose payments have run out, but so far, nothing has been done on the federal level.

It is unlikely that Congress will take up the issue before this year’s midterm elections, regardless of popular opinion on the topic.

The economy is certainly picking up in time for the midterm elections, and the Democratic Party will attempt to latch onto the overall improved fortunes of Americans in order to hold onto the Senate and perhaps pick up seats in the House of Representatives.