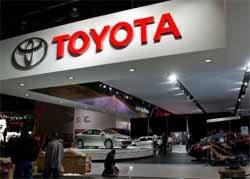 If one were to rate a company’s success in technological success by the number of new innovations they develop than according to the U. S. Patent Office Toyota is the king as the company received more patents than any other automaker in 2012.

The auto company received approval for 1,491 patents in 2012, which marks a 31% increase over 2011, according to the Intellectual Property Owners Association’s annual list of top 300 US patent recipients. Toyota ranked number 13 overall on the list.

Patents granted is an important distinction as many times a person or company can file for patents on nearly any number of items, however they can be frequently rejected. What a patent is actually granted it’s just the patent office acknowledges it is a unique invention or innovation.

Among all automakers, General Motors ranked number two with 1,374 patents, which is 26 percent increase while Honda Motor Co. came in third with 1,074, a 12 percent rise.

“Different organizations measure patent and innovation leadership differently,” a GM spokesman wrote in an e-mail to Automotive News. “While many recognize GM as the industry innovation leader, the only measure that matters to us is what is a relevant application to the vehicle and benefits our customers.”

Among Toyotas patents for 2012 include those granted for items such as improvements for car communication systems and materials more adept at helping vehicles repel insect splatter.

“Since the days of Toyota’s founding, innovation has been a cornerstone of Toyota’s success,” Kristen Tabar, vice president of electrical systems engineering at the Toyota Technical Center, said in a statement. “We’re driven to listen to our customers and develop new ways to improve their experience.”

In a further indication of the company’s overall ingenuity to Toyota employees receive their 20th patents in 2012, Charan Lota, manager of electronic systems at the Toyota Technical Center and Minjuan Zhang, manager of Toyota Research Institute North America.

“You can tell a lot about a company by the new ideas they generate,” Lota said in a statement. “And, what these patents show about Toyota is that we are never going to stop trying to make better cars.”

While many associate Toyota as being a Japanese car the Toyota Technical Center, which is a division of Toyota Motor Engineering and Manufacturing North America, has facilities in Ann Arbor, Saline, Livonia and Plymouth, Mich. as well as operations in California and Arizona.