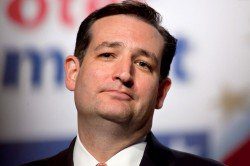 U.S. Senator Ted Cruz has charged Harry Reid with being President Obama’s “enabler” and claims that him and his team “roll over and acquiesce” to White House Demands.

“When the president ignores the law and ignores the constitution, Harry Reid and the Senate Democrats stand up and cheer and that is profoundly dangerous to our liberty,” continued Cruz.

Cruz also likened President Obama’s supposed abuses of power to former President Richard Nixon, and even went as far to claim that Obama has surpassed Nixon in his corruptness.

Nixon faced opposition from his own party when he was under fire for breaking the law, while President Obama has seen nothing but support from Democrats throughout the string of scandals that have plagued his presidency.

“What’s different now is that when President Obama openly scoffs at the laws on the book, when President Obama and the Obama administration not only tried but they succeeded in using the IRS to target political enemies- Nixon never succeeded but Obama did- not a single Democratic senator, not one, is willing to stand up to President Obama and call him to account. That is unprecedented to have senators who simply roll over and acquiesce in the usurpation of power from the executive who is undermining the rule of law.”

Cruz makes a salient point about the president’s own party’s complicit attitude toward his more questionable actions.

Democrats have stonewalled investigations into the IRS targeting scandal, the Fast and Furious gunrunning scandal, and the Benghazi attack. There has been mounting frustration among those who want answers into issues such as these, but the Democratic Party is seemingly placing protecting Obama and Clinton above conducting thorough investigations.

This matter is further complicated by the fact that the Justice Department, led by Eric Holder, has refused to cooperate with investigations.