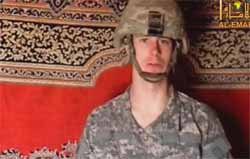 Time magazine is reporting that a top Taliban commander is claiming that Obama’s choice to release five of their top leaders in exchange for a reported Army deserter has inspired them to kidnap more Americans in order to get more of their comrades released from Gitmo.

When asked by Time if Obama’s deal to free Sgt. Bowe Bergdahl last week would inspire them to kidnap others, a Taliban commander who is described as being close to the senior Taliban leadership replied, “Definitely.”

“It’s better to kidnap one person like Bergdahl than kidnapping hundreds of useless people. It has encouraged our people. Now everybody will work hard to capture such an important bird.”

The confirmation by the Taliban commander confirms fears and concerns expressed by Republican lawmakers who have warned that by negotiating with terrorists over prisoner releases President Obama is motivating Islamic terrorists to capture more Americans in order to secure the release of captured terrorists.

Texas Republican Sen. Ted Cruz, who is a possible GOP presidential candidate, said while he was glad to see any captured American come home, there were better ways to do it and the president’s move sets a dangerous precedent.

“How many soldiers lost their lives to capture those five Taliban terrorists that we just released?” Mr. Cruz said. “What does this tell terrorists, that if you capture a U.S. soldier, you can trade that soldier for five terrorists we’ve gone after.”

Cal Thomas, a columnist for the Washington Examiner agrees with Cruz, and says that the price could end up higher than just being the rescue of one man.

“Freeing five dangerous men to secure the release of one soldier could very well put this country in increased danger. What should we have done? It depends upon the outcome one is seeking,” Thomas said. “If rescuing one man is paramount, then any price is worth it. But if that rescue leads to the deaths of others, as is likely, then the price is too high.”

President Obama has been steadfast in defending his decision to release five of the most dangerous terrorists held at Gitmo, arguing that it is a long-standing American tradition to fight for the release of prisoners of war.

However, critics have pointed out that such negotiations typically take place after a war is officially over, and in the case of Afghanistan, there is no indication the Taliban is intending to cease hostilities.

Bergdahl’s fellow soldiers have come forward and accused him of desertion, which is subject to the death penalty when occurring in a combat environment.