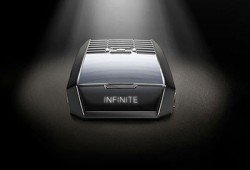 The technology is called Wysips Crystal and is being developed by Sunpartner Technologies. Wysips Crystal is an invisible layer of photovoltaic solar cells sandwiched in between the Meridiist Infinite’s sapphire crystal panel and the LCD screen. The invisible layer of cells charge automatically whenever the Meridiist Infinite is exposed to certain natural or artificial lighting. It is even able to charge while the phone’s battery is completely drained.

The TAG Heuer Meridiist Infinite is made from grade 5 Titanium, carbon, and rubber. It features a 2.4-inch TFT LCD display with a screen resolution of 320 x 240 pixels and a monochrome OLED panel on top of the device. The top monochrome OLED display shows users extra information, including battery life or charging level. It also features dual SIM support, a 5 megapixel rear camera, and 8GB of internal storage.

“TAG Heuer stands for “Technologie d’Avant-Garde”, and the MERIDIIST INFINITE perpetuates a great tradition that came before it.”

TAG Heuer will launch the Meridiist Infinite worldwide sometime in July 2014, but it will be in limited stock with the company only making 1911 units. The luxury smartphone will be sold through selected TAG Heuer boutiques and Watch & Jewellery retailers. The company did not announce an official price for the Meridiist Infinite, but it should be noted that the current Meridiist model is available for 3,900 euros, so expect that the Meridiist infinite will cost more than that.

Other phones powered by solar cells in their screens have previously been previewed, including a solar powered phone from Alcatel revealed earlier this year at CES 2014. Apple is also rumored to be making a solar cell-equipped screen for its next iPhone.

Martin is a video game and tech writer from the Philippines. He's been in love with video games and technology for over 20 years. He also designs & develops websites on the side.