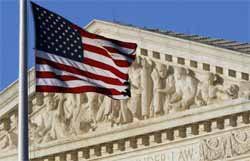 In a case that has profound implications for the First Amendment and religious liberties, the United States Supreme Court is being asked to restore the religious rights of a New Mexico photographer who was recently told that abandoning one’s freedom is simply the “price of citizenship.”

The issue revolves around the case of Elaine Huguenin, who is co-owner of Elane Photography with her husband Jonathan.

Elaine was asked to commemorate a same-sex ceremony by Vanessa Willock. Same-sex marriage is currently prohibited in the state.

Elaine refused, saying that while she does not discriminate against homosexuals on the basis of their orientation, her Christian beliefs prohibited her from sanctioning the marriage of two members of the same sex, and subsequently she could not take pictures for the ceremony.

Although Willock was able to get another photographer to do the ceremony, she filed a complaint against Elane Photography under the state’s anti-discrimination law.

The state Supreme Court ruled that the Huguenins did not have any right to refuse to express sentiments contrary to her beliefs.

The court ordered Elaine to pay $6,637.94 in attorneys’ fees to Willock and her partner.

The ruling said Elaine and her husband are “now compelled by law to compromise the very religious beliefs that inspire their lives,” because according to the court that is “the price of citizenship.”

Jordan Lorence, Senior Counsel with the Alliance Defending Freedom, which is working on the case, said the judge’s ruling is a “chilling” attack on the First Amendment guarantee of freedom of religion.

“The idea that free people can be ‘compelled by law to compromise the very religious beliefs that inspire their lives’ as the ‘price of citizenship’ is a chilling and unprecedented attack on freedom,” Lorence said. ““We are asking the U.S. Supreme Court to make it clear that no American has to abandon their constitutionally protected freedoms just to make a living. No American should be punished or put out of business simply for disagreeing with the government’s opinion on a moral issue,”

The ADF explained to the Supreme Court that the Huguenins’ “will serve anyone; they do not turn away any customers because of their protected class status.”

“But they will decline a request, as the First Amendment guarantees them the right to do, if the context would require them to express messages that conflict with their religious beliefs. The New Mexico Supreme Court … held that the Huguenins do not have a constitutional right to be free from compelled speech because they create expression for paying customers. That decision conflicts with this court’s compelled-speech precedent,” the pleading explained.