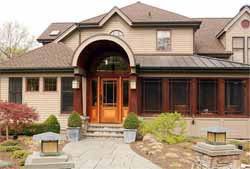 A new Harvard University study finds that rising home sales, starts, and prices is fueling a surge in the country’s home remodeling market.

The first double-digit gains in the market are expected to continue through 2014 before slowing to under 10% by the year’s end. The slowed growth at the end of the year reflects an expected uptick in borrowing costs as the market returns to pre-recession spending levels. Rising interest rates and fewer housing starts may begin to dampen remodeling spending half-way through the year.

“The ongoing growth that we’ve seen in home prices, housing starts and existing home sales is also being reflected in home improvement activity,” said Eric Belsky, managing director of the Joint Center. “As owners gain more confidence in the housing market, they are more likely to undertake home improvements that they have deferred.”

While most home renovations don’t pay off dollar-for-dollar when the home is sold, the return on investment for remodeling jobs this year increased to more than 66%, the largest increase since 2005, according to Remodeling Magazine.

The magazine’s annual Cost vs Value report is released every January in cooperation with Realtors across the country. On Friday, the results will be published to find out which projects agents rank as offering the highest resale value to homeowners. The survey this year was expanded to 100 metro markets in the country, up from 81 last year, for a bigger picture of remodeling trends in the U.S.

A study in 2013 by home improvement website Houzz.com also backed up these predictions, finding that homeowners would rather cut back in other areas like big-ticket purchases than delay or decrease budgets for home projects.

To reach these findings, the Joint Center used LIRA, or the Leading Indicator of Remodeling Activity, a tool its Remodeling Futures Program developed. LIRA is designed to predict national homeowner spending on improvements for the current quarter and the next three quarters to give a short-term outlook on remodeling activity and identify future turning points in the industry.