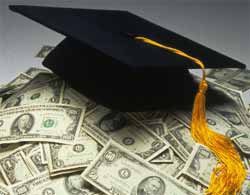 Student loan debt is soaring, creating not only a burdened class of graduates but a generation that is unable to save and invest its money, potentially causing long-term harm to economic growth.

A new Pew Charitable Trusts study has found that college graduates born between 1965 and 1980 have accumulated less wealth than their parents at the same age. Members of Generation X have built up about $20,000 less home equity than their parents, after adjusting for inflation, with a median debt that is 7 times higher, despite the fact that the generation has an adjusted median household income that is $20,000 higher.

While most graduates eventually find a way to pay off student loans, they sacrifice home equity and savings to do so. Many delay marriage, children, starting their own business and buying a home while they are still paying off debt.

There is strong evidence that the rising level of student loan debt is also holding back the housing recovery, with a first-time homebuyer rate that is at its lowest level in nearly two decades. According to John Burns Real Estate Consulting, a home builder advisor, student loan debt will cost the housing industry about $83 billion in sales this year alone.

Student debt is currently rising by nearly 6% every year, and this trend will likely continue.

The report issued by John Burns estimates that heavy debt will reduce home sales by 8% in 2014, and households that must pay at least $750 a month for student debt are completely priced out of the housing market.

While student loans are holding back millions from homeownership, default rates are still a problem. Last month, the Department of Education released its annual report on student loan default rates for loans that have been in repayment for three years. The official 3-year default rate dropped to 13.7%, down a percentage point from last year, although the number of students who default on federal loans remains very high.

A study this year by the Brookings Institute fund that the average student loan borrower took 13.4 years to pay off the loan in 2010, up from 7.5 years in 1992. Student loan debt now surpasses $1 trillion.

“The domino effect of student loan debt is real, and it is spreading. It is hard to erase this debt quickly — paying it back may take many long years and prevent people from achieving other financial milestones,” said Richard Cordray, director of the Consumer Financial Protection Bureau.

When graduates are burdened with student debt, they delay buying a home and having children. This debt also poses long-term consequences as borrowers accumulate less wealth, which eventually places their children at a disadvantage.

Student debt will also impact the ability of borrowers to retire, as Social Security payments can be garnished for not paying off student loans. While many borrowers are under 40, there are many who are older, including adults who are trying to get a degree and re-enter the workforce or go to graduate school after losing a job.