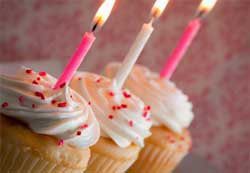 In a move a parent has likened to being “food Nazis,” school districts across the country are beginning to ban a long established tradition in schools to comply with the strict nutritional guidelines championed by First Lady Michelle Obama.

In Washington, the Edmonds School District announced students will no longer be able to bring birthday cupcakes to classrooms because the treats are not healthy for the young students based on federal nutrition guidelines.

Michelle Obama worked with federal lawmakers to craft the rules which places strict regulations on the amount of meat, whole grains, salt, and vegetables that students must be given at school lunch programs, even if the students do not want the items.

“Birthday parties in classrooms may be celebrated with non-food treats and favors for students. No food is allowed as part of a birthday celebration,” The Herald reports a new Edmonds School District policy tied to the federal lunch rules says.

In its place, the Herald reports the district is going to be giving out origami frogs and pencils.

The guidelines have been met with stiff resistance from students across the country. It has been reported that large amounts of waste has been generated from items on the menu being thrown away by students who strongly dislike the taste of the food. However, the cafeterias are required to make the students take certain items such as a vegetable, even if the student says they have no intention of eating it.

As a result of the new menu choices, some parents have opted to return to making their children’s lunches for school so the parents can have control over the food their children eat.

However, the Obama administration is now taking aim at food brought into the school by children. Under the federal guidelines, schools are being pressured to prevent fruit drinks and soda from being eaten in the cafeteria, including those brought by students from home.

In addition, the government is cracking down on sweets brought into the school for birthday parties as well as fundraisers. The restriction is not just limited to official school held fundraisers, but even those held by outside groups.

During a meeting with the local Parent Teacher Organization, a private group of parents who raise money for the schools, Jenna Raymond, with the district 6 nutrition department, told the group they would no longer be able to use food items to raise money.

“Fundraisers held at the school are no longer allowed to include food items of any kind,” she said. “Rewards for children are to include gifts such as erasers and pencils.”

However, jaws dropped when she stated the restrictions also applied to fundraisers held outside of the school.

“The only food items allowed to be sold for these types of fundraisers are those that meet the nutritional guidelines.”

She said this would include the traditional fundraisers that many schools have done in the fall where students sell cookie dough and other sweets. “Candy bar sales of any kind are also out as a fundraising event.”

Raymond also said if teachers saw a student with a soda, even if it was brought from home, that “they are to inform them they are not allowed to drink it in the cafeteria or on campus.”

One of the parents strongly objected saying the bans on private events went too far.

“I understand having restrictions on things such as nuts for those who have allergies, but what gives the district the right to dictate to me what I can and cannot put in my child’s lunch? This sounds like the government is trying to be a bunch of food Nazis.”