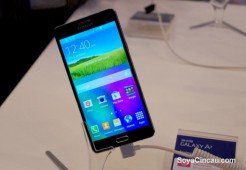 After weeks of rumors and speculations about the upcoming Samsung Galaxy A7, the South Korean giant has finally confirmed the existence of the phone. Although the reveal was not in the usual way of a special press conference or press release, Samsung showed off the device at the announcement of the Galaxy A3 and Galaxy A5 smartphones in Malaysia. This was the first time the company showcased the device.

In case you are wondering, yes, as rumors predicted, the Galaxy A7 is indeed the company’s thinnest smartphone till now. It measures just 6.3mm in thickness which is a bit thinner than the recently announced A5. Unlike the A5 and the A3, the new Galaxy A7 will sport a much bigger screen and a powerful processor.

It comes with the new Snapdragon 615 CPU clocked at 1.5GHz. On the front, there is a large 5.5-inch display with an impressive 1920 x 1080p display. Like all A series smartphones, the A7 will feature premium metal body which will look especially good with its super slim design. There is a 13MP rear camera and a 2600 mAh battery onboard.

The phone runs on Android 4.4 KitKat OS, however, it will most likely be upgraded to Android 5.0 Lollipop soon. While the company did not reveal details about US release dates, it said that the phone will be available in Malaysia from February. Before that, it could be unveiled at the company’s home country, South Korea and later it could hit the US shores.

Apart from the Galaxy A7, the company also announced two new smartphones in an entirely new lineup this week. The new Galaxy E7 and E5 feature mid-range specs with the same metal design profile as the A series phones. This move isn’t surprising since the company had said that it would kill of the premium Galaxy Alpha to concentrate on other mid-range and cheap metal offerings. As for the tech specs, the E7 comes with a quad-core processor clocked at 1.2GHz with 2GB RAM and 16GB of expandable memory. There is a 5.5-inch display up front with a 720p resolution. The Galaxy E5 on the other hand will come with a smaller 5-inch display with the same 720p resolution. It will also sport a quad-core SoC clocked at 1.2GHz but will come with 1.5GB RAM and 16GB of storage which will be expandable. The E7 and the E5 are expected to retail for round $363 and $305 respectively in the coming months.