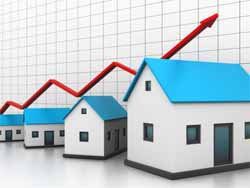 As mortgage interest rates start increasing, it should not surprise that sales of homes have not yet been affected. Industry analysts emphasize that homebuyers still have no reason to raise any concern. That is because in general, interest rates remain low.

Data from Bankrate.com show that interest rates on 30-year mortgages slightly dropped to 4.48% last week, from 4.61% in the preceding week. Although no one can expect rates to go down to the 3.5% level several weeks ago, there is no reason to halt any plan to get home financing.

It should not surprise anyone to see interest rates reach about 5% next year. To some experts, sales of homes may start to feel some pinch by then. Buyers would surely feel the burden if the rates rise to 6% to 7%, which may not be impossible in the coming years.

According to experts, mortgage interest rates at around 4.5% are still considerably low and should not prompt any market panic. By historic standards, the current rates could still be considered reasonable. Based on historical data from Freddie Mac, interest rates on 30-year mortgages were more than 6% in 2008, at the height of the financial crisis. The rates were at more than 10% in 1990 and more than 17% in 1982.

Interest rates on home loans of about 4.5% would still not translate to a significant additional amount to monthly amortizations. For instance, for a borrower’s $220,000 mortgage, he would shoulder at least $100 as an added amount to his monthly home loan repayment. That would be compared to a mortgage with a locked in interest of around 3.5%, a record low, in May.

It is a great irony that an improving economy is a contributory factor to increasing interest rates. In the past several months, mortgage interest rates have been kept very low because of the Quantitative Easing program of Fed. The central bank’s $85 billion monthly fund infusion is meant to further stimulate borrowing through lower rates. That strategy worked.

The Fed’s monthly purchases boost demand particularly for securities that are mortgage-backed. The action lowers interest rates applied to borrowers. Interest rates for 30-year home loans dropped to its historical low of 3.3% in November. It only started rising again in the middle of May when Fed initially hinted plans to slowdown on its monthly capital infusion to the market.

It can be recalled that rates breached the 4% mark several weeks ago. The increasing trend began after Fed chairman Ben Bernanke in June 19 announced in a press conference that the central bank would surely cut down and eventually stop the program. He cited the strongly improving economy for the plan. Since then, the agency has emphasized that it would slowly implement the plan and completely scrap it next year but only if the economy remains strong for several months.