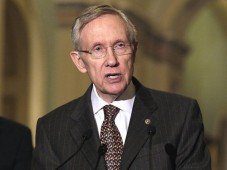 On Thursday, the GOP blocked a popular tax cut bill in response to Democrats refusing to allow GOP amendments that would extend unemployment benefits and provide retroactive pay to millions of struggling Americans, make some of the tax cuts permanent, and repeal an unpopular medical device tax.

The tax cut would have provided more than 50 different breaks, and before Senate Majority Leader Harry Reid refused to attach various amendments to the measure, it was widely expect to easily pass the Senate. The tax cut required 60 votes to pass, but it fell short by seven votes.

Republicans are considering their newest move in the unemployment benefits saga a response to what they see as an unfair power structure in the Senate. Harry Reid has unilaterally blocked GOP amendments for months. He also angered Republicans by changing the rules of the Senate and lowering the threshold of votes needed to confirm presidential nominees.

“The American people need to know what’s happening to their Senate. Instead of preserving the Senate’s prerogatives, they’ve systematically weakened or destroyed them. They’ve turned the Senate into a graveyard of good ideas, and open, Democratic debate,” said Senate Majority Leader Harry Reid (D-Nev.)

Perhaps the most important proposed amendment was one crafted by senator Dean Heller which would have provided extended unemployment benefits to millions of Americans as well as provide back pay to those whose benefits ran out late last year.

Democrats see the move by Republicans as part of the party’s trend of obstructing every move that Democrats attempt to make.

Reid commented after the vote, saying, “I would hope that come November, the American people will just say no to this gridlock we have in Washington in the United states Senate.”

Democrats also found it important to shoot down the amendment that would repeal a new medical device tax. This tax would raise $29 billion over the next decade, and it is a necessary funding source for President Obama’s Affordable Care Act.

So while Republicans attempted to do something about the unemployment crisis in America, they were also taking a shot at Obamacare with these amendments.