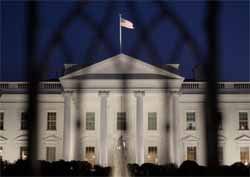 During the government shutdown, President Obama consistently warned the American people that the economic system could collapse if the debt ceiling was not raised and blamed Republicans for whatever disaster might occur, however new information has surfaced that indicate the crisis was actually created by the administration for political gain.

The shocking bombshell was made by former editor of Newsweek and editor-in-chief of the New York Times Magazine, Ed Klein.

Klein told the New York Post that Valerie Jarrett, president Obama’s closest adviser developed a strategy intended to force a shutdown with Republicans over Obamacare. While formulating the plan, Jarrett recommended shutting down the government because, according to Klein, she believed voters would pin the blame on Republicans just as they did in 1996 and this would give Democrats an opportunity to win control of the House of Representatives in the 2014 midterm elections.

Klein said his information was confirmed after he conducted interviews with over half a dozen White House officials and former presidential advisers about the shutdown plan.

Klein said his research revealed that Jarrett was the “architect” of the strategy of refusing to negotiate with Republicans over Obamacare.

“She convinced the president that a government shutdown and default offered a great opportunity to demonize the Republicans and help the Democrats win back a majority in the House of Representatives in 2014,” he explained. “Valerie also came with the idea of using the words ‘hostage,’ and ‘ransom’ and ‘terrorists’ against the Republicans.”

He said Jarrett’s advice to Obama was, “[D]o not cooperate one iota on Obamacare. Don’t give an inch. Let the Republicans stew in their own juice.”

Klein added, “Republicans walked into a trap set up by Valerie Jarrett and President Obama.”

If the information turns out to be correct, it has the potential to blow up in Democrats faces. After sounding the horror stories as well as tales of victims from the government shutdown, if it were to turn out that it was an event that need never have occurred; the American people could turn on the Democrats and exact a high price from them during the midterms. The American people are already angry over the selective closing of national monuments which smacked of a vindictive spirit.

Rep. Louie Gohmert, R-Texas said he believes it is plainly evident the administration had planned the shut down and that the evidence is actually in plain view for all to see.

In interview with Fox news Gohmert noted on the eve of the shutdown, Sept. 30 the administration already had barricades and cones in place. Another interesting point is the proliferation of neatly printed signs across the country that stated the parks were closed due to government shutdown. If the shutdown truly was unexpected, how is it that the government which normally contracts out for sign services was able to have such a large majority of these signs printed up and available for use on the day of the shutdown?