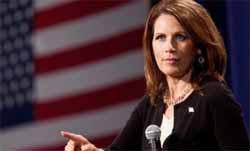 Congresswoman Michelle Bachmann said history will record President Obama’s legacy as one of establishing lawlessness throughout the country on a variety of issues.

The remarks by Bachmann, who was a Republican presidential candidate, were made during a “Conversations with Conservatives” meeting on Jan. 15, sponsored by the Heritage Foundation, the nation’s largest independent think tank. Her statement came in response to a question about recent decisions by federal judges striking down legislation in Utah and Oklahoma declaring the states would only recognize marriages involving a man and a woman.

Supporters of gay marriage have portrayed the states as “outlawing” same-sex marriages; however the language of the legislation merely states what kinds of marriages the state will recognize. There is nothing in the legislation that would prohibit a member of the clergy or similar official from conducting some type of ceremony acknowledging the couple’s relationship with each other.

“The president and [Attorney General] Eric Holder were very clear when the president came in,” said Rep. Bachmann.  “He said that he believes that the DOMA law [Defense of Marriage Act] was unconstitutional and he wouldn’t enforce it. That’s one example of the lawlessness of this president. He’s violating his obligation under the Constitution to faithfully execute the laws of the land.”

She continued, “He announced to the nation he wasn’t going to faithfully execute the laws of the land. And what’s interesting is that, essentially, you have judges citing an unconstitutional act of the president [ignoring DOMA] as the precedent for their lawless decision for activism.”

“So we’ve completely gone askew from what the Founders bled and died and fought for, and that was to have a limited government under a written Constitution, not an unwritten, ever-evolving living letter that becomes whatever anyone wants at any moment, but it actually means something,” she said.

Past presidents have issued executive orders to various degrees; President John F. Kennedy issued a series of executive orders that would have given him the authority to seize all radio and television stations in the event of a national emergency.

The constitution tasks the president with taking care that the laws are “faithfully executed.”

However, Obama has used his executive authority to choose which laws to enforce and who they would apply to. He proclaimed that he would not be enforcing portions of the country’s immigration laws and his administration has given many of his supporters such as big labor from being exempt from some of the law’s more controversial positions.

Bachmann said the president’s recent actions as well as his statement that he intends to bypass Congress to advance his agenda is eerily reminiscent of former Egyptian President Morsi in Egypt.

“When a president decides that he’s going to write a law, that sounds a lot like former President [Mohamed] Morsi in Egypt, who all of a sudden declared that whatever his edict was, [it] was not appealable to a court,” she said.  “Whatever he said was law. Well, how is that much different from what we’re seeing come out of the White House today? We’re seeing many of the same actions. And now judges are taking their cues from the White House and that’s a very adversarial precedent that’s being set for the future of law and security in the United States.”