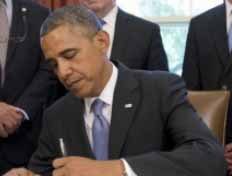 On Friday, President Barack Obama signed a bipartisan student loan bill into law. The bill was approved by the Senate two weeks ago, then passed by the House just last week.

Without the act of Congress, interest rates on college student loans would have doubled from 3.4 percent to 6.8 percent. With the new law signed by the president, the rate will fall back to 3.86 percent for undergraduate loans and 5.41 percent for graduate student loans. The president’s signature on the bill ends months of arguments about how much the federal government should subsidize student loans and whether students will face unbearable repayment burdens during the next several years should rates climb, as many experts expect.

The compromise bill was crafted by a group of bipartisan senators, including Sens. Joe Manchin, D-W.V., Richard Burr, R-N.C., and Angus King, I-Maine. A signing ceremony was held at the White House, and Obama said it, “feels good signing bills. I haven’t done this in a while.”

King had said, “We have demonstrated to the American people that this body has the capacity to overcome partisan differences.” He further stated that the bill “offers a long-term, market-based solution that lowers and caps interest rates for all students taking out a loan and finally gets Congress out of the business of setting rates.”

With the new law, the government will establish variable interest rates on Stafford loans for undergraduate college students, but caps that rate at 8.25 percent. The variable rate each year will be pegged to the rate on 10-year Treasury notes, plus 2.05 percent. The law sets the rates on loans that are issued to graduate or professional students at the rate of the high-yield 10-year Treasury note plus 3.6 percent, but caps it at 9.5 percent.

The new law applies to all loans made on or after July 1, according to reports.

In June, Democrats in Senate got 51 votes for a measure that would have set a fixed 3.4 percent interest rate for student loans during the next two years. It fell short of the 60 votes required for it to overcome a potential filibuster. All Democratic senators except Manchin voted to advance Reed’s measure to final passage, not a single Republican voted for it.

Sen. Elizabeth Warren, of Massachusetts, a Democrat, called the bill that passed “obscene” because she said that the bill does not address the fact that in a few years students will end up paying far higher interest rates on their student loans.