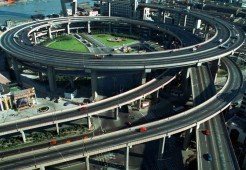 On Wednesday, President Obama defended his 2009 stimulus package and also took the time to unveil a new government initiative that would provide grants to states to help repair the nation’s aging infrastructure.

Obama said that the stimulus “actually worked, despite what everybody claimed.” He then announced a new competition for federal grants designed to fix roads, bridges, and transportation hubs.

“I’m here to launch a new competition for 21st– century infrastructure and the jobs that come with it. Any opportunity agenda begins with creating good jobs. One of the fastest and best ways to create good
jobs is by rebuilding America’s infrastructure,” said Obama during his speech at the Union Depot in St. Paul Minnesota.

The president’s plan involves allocating $600 million in new grants that will go to state and local governments that submit proposals designed to “modernize transportation infrastructure.” There is a catch though, as these projects will have to have some backing by private entities in order to receive federal grant money.

“We have 100,000 bridges that are old enough to qualify for Medicare,” said Obama, who went on to say that infrastructure is “vital to business.”

Obama then related the initiative to the residents of Minnesota, saying “when we go through a winter like this roads are wrecked, full of potholes across the country.”

Minnesota has had a particularly rough winter season, and infrastructure in the state has taken a beating as a result.

Besides the $600 million federal infrastructure grant program, the president’s forthcoming budget will request over $300 billion in new infrastructure spending.

“While Congress decides what it’s going to do, I’m going to do what I can to create more good jobs,” insisted the president.

Obama has promised to move ahead and take unilateral actions in regard to infrastructure spending should Congress fail to act on the issue.

The president’s lofty goal of improving the nation’s infrastructure while creating what he calls “good jobs” is a double-edged sword. Spending billions of dollars on construction projects will create jobs
in the short term, but it will do so on the taxpayers’ dime.

His initiative does involve cooperation with the private sector, but the contracts that will be rewarded to states and local governments in order to create jobs will be highly artificial in nature. Private sector employment has been relatively dismal since the financial crisis, yet at the same time, the number of people making a living working for public sector money has skyrocketed.