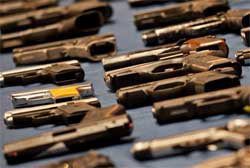 Upping the ante on the gun control issue, President Obama used the shooting at a High School in Oregon to advocate for stricter gun control, saying he admired steps taken in Australia where they banned all firearms.

During the shooting, which occurred on the last day of school at Reynolds High School in Troutdale, Oregon, the shooter killed a student and injured a teacher before killing himself.

However, just as the president frequently claims he is not aware of what is happening in his administration until he hears about it in the news, he likewise appears ignorant of existing gun laws. Under existing federal legislation anyone wishing to buy a firearm from a store must undergo a background check. Yet the president suggests that people are unable to buy guns without any check at all.

Then, while speaking to users of Tumblr, the president went on to reveal what he would ultimately like to accomplish in the gun control debate.

“Our levels of gun violence are off the charts. There’s no advanced, developed country that would put up with this.”

Charles Cooke, writing for the National Review, noted that the president’s statements were carefully chosen and says they were plainly an attempt to move the gun control issue towards confiscation.

“You simply cannot praise Australia’s gun-laws without praising the country’s mass confiscation program. That is Australia’s law,” Cooke said. “One doesn’t bring up countries that have confiscated firearms as a shining example unless one wishes to push the conversation toward confiscation.”