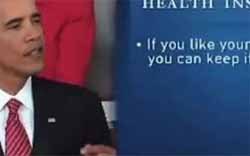 Politifact, which has become known for rating the truthfulness of politicians’ statements, has given Obama the ‘Lie of the Year’ award. This award is a dubious honor for the president to receive. It highlights the disastrous implementation of the president’s signature piece of legislation, and is indicative of the current frustration level that many people have with Obamacare.

Millions of Americans have been receiving cancellation letters from their insurance companies. This is because many policies that have been in place for years do not meet the specific coverage standards that Obamacare requires.

It seems like 2013’s ‘Lie of the Year’ will have big implications on the 2014-midterm elections. Frustrations over the president’s healthcare law will help the Republican Party out next November. Republicans are vying to increase their majority in the House and win back the Senate.

Obama originally made the ‘keep your plan’ claim back in 2008 when he was on the campaign trail. Politifact rate this claim true, and even lambasted many Republicans who dared to call the president’s claim false.

Many see Politifact’s change in the rating of the president’s claim to be too little too late. It was only after millions of Americans lost their insurance policies that Politifact decided to finally label the ‘keep you plan’ statement as ‘pants-on-fire false.’

Even though Politifact is behind the times on rating Obama’s promise as false, conservatives will still be pleased with the rating. Many have warned about the implications that Obamacare will have on the currently insured masses over the past few years, and the millions of cancellations and ‘Lie of the Year’ award will come as a validation of their fears.

Obamacare continues to be a thorn in the side of the president’s administration. It will surely cause a lot of problems for the Democratic Party in 2014. If many of the problems with Obamacare’s implementation are not sorted out soon, you can expect Democrats to attempt to distance themselves from the healthcare issue.