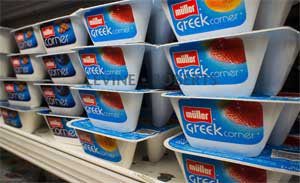 PepsiCo Inc., which is known mostly for products like the carbonated drink Pepsi, and Frito-Lay chips, has decided to go national with its Muller brand of yogurt. This step comes at a time when consumers are turning to healthier alternatives instead of traditional fizzy drinks.

It is apparent that PepsiCo thinks there is plenty of profit to be made through the sale of yogurt, as it happens to be one of the fastest selling items in grocery stores. This has happened because consumers are becoming more health conscious in the wake of an increase in obesity across the nation.

PepsiCo has decided to team up with Germany’s Theo Muller Group, which is well-established in Europe as a producer of dairy goods and has much expertise in the field. This will most likely help enhance PepsiCo’s chances of being successful, and is the same strategy the brand used earlier to gain a share in the market related to hummus and other such healthy dips.

However, experts are of the opinion that even with the expertise of one and the size of the other, Muller Quaker Dairy joint venture will not find the going easy. The yogurt market is very competitive, and consumers are always on the lookout for low prices. Established yogurt producers in the United States, such as General Mills Inc., Yoplait and Danone often sell their products at dizzyingly discounted prices.

In fact, thanks to the fierce competition, Kraft Foods had to withdraw its line of Greek yogurt, Athenos, in 2012. The product had been launched just two years before that.

Some experts seem to think that aggressive use of funds in marketing the yogurt will help make it successful, but the Chief Executive Officer of PepsiCo, Indra Nooyi, has stated that the company will not overdo spending when it comes to the launch of the yogurt. She said that the company believes the product is innovative enough to command premium prices.

The new factory that will handle the producing of the yogurt has been set up in Batavia, New York, and Nooyi was recently on a tour of the same.

Though the yogurt market has grown by leaps and bounds over the last few years in the United States, the consumption of yogurt is not as high there as in Europe. Experts think this means that there is plenty of space for growth still. Yoplait currently sees the highest sales of yogurt.