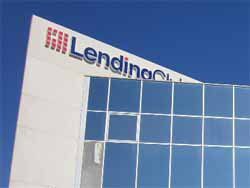 After months of speculation predicting the move, Lending Club Corp., the largest peer-to-peer lender in the United States, is planning an initial public offering in the second half of the year and hopes to raise $500 million, according to people close to the matter.

In anticipation of the process, Lending Club has started to tap banks, including Goldman Sachs Group and Morgan Stanley, to work on an IPO later in the year. In a recent fundraising, Lending Club was valued at close to $4 billion and may seek a higher valuation in the IPO. This valuation in April is up 63% from November.

Lending Club is one of the most valuable private companies in the country and one of the largest peer lending marketplaces in the world. The company is now growing so quickly that it’s doubling the amount of loans issued every 9 months.

Lending Club connects investors with individual borrowers and small businesses online in exchange for a yield above 10-year Treasuries. It has facilitated over $4 billion in loans since it started seven years ago. Because the Securities and Exchange Commission require that issuers of securities register with the regulator, Lending Club’s finances have already been public. Last year, the San Francisco-based company posted $7.31 million in net income.

Lending Club works by allowing users to borrow up to $35,000 in personal loans or $100,000 for a business loan with access to cash within days. The money comes from investors who choose which loans to invest in, and then receive a monthly return. This process cuts out the middlemen like credit card companies.

CEO Renaud Laplanche has said that he envisions the business expanding to include institutional banks as lenders, which may help the company reach more people.