According to a recent report from Jon Peddie Research (JPR), the personal computer gaming market is currently worth around $21.5 billion, which is almost double compared to the console gaming market. It seems console gaming market leaders such as Microsoft’s (NASDAQ:MSFT) [stockdata ticker=”MSFT”] Xbox, Sony’s (NYSE:SNE) [stockdata ticker=”SNE”] PlayStation, and Nintendo’s (OTCMKTS:NTDOY) Wii have yet to lure enough gaming enthusiasts into their console platforms. 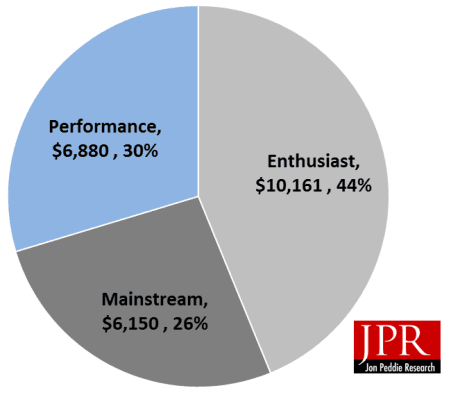 To explain the overall situation in the gaming market, Senior Gaming Analyst of JPR, Ted Pollak, mentioned that “Committed PC gamers are generally not interested in pure content consumption platforms.”

As a result, power PC users usually invest a hefty sum to build an all purpose machine that they can use to edit videos, create content and other regular tasks besides playing highly demand games. “They are power users and pay thousands for the ability to play games at very high settings and then do business, video/photo editing, content creation and other tasks with maximum horsepower at their disposal in a desktop ergonomic environment,” he said.

The forecast from Jon Peddie Research is that by 2017, the PC gaming hardware market size will reach $23.1 billion, where 30% gamers will be considered power users looking for performance.

This segment of the PC gaming hardware market will likely spend around $6.88 billion by 2017.

The President of Jon Peddie Research, Jon Peddie, noted “Nvidia, Intel, and AMD have enthusiast CPUs and GPUs that are so powerful, when combined with SSD’s and fast memory they absolutely trounce the computing power and gaming capabilities of the newest console generation.” He also thinks that performance seeking gamers with good PC configurations can get more pixels on their HDTV compared to attaching a gaming console to that same HDTV.

The report outlined that the “mainstream” gaming segment, forecasted to become a $6.15 billion market by 2017, is under threat from consoles like PlayStation and Xbox, not the “performance” segment. This is because high end performance seeking gamers treats their gaming hardware as a prestige item, like how Sports car owners treat their vehicles. Hence, there is certainly a Veblen good theory at work.