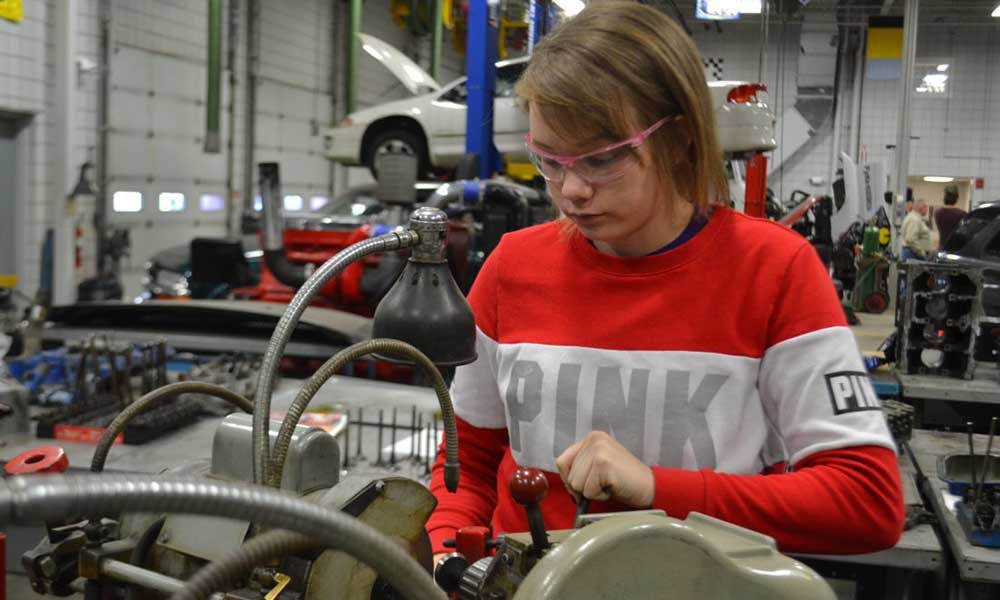 Washington State Community College breaks the mold of the auto industry with its mechanics’ students.

The industry is not a common profession for women. In fact, less than two percent of auto technicians and mechanics are women, according to the Bureau of Labor Statistics. However, one student at the Washington State Community College is changing that stereotype.

The statistics have never discouraged 20-year-old Brittany Reed from pursuing her passion of fixing cars. Reed, who is now pursuing a degree in auto diesel mechanics, said working with her father inspired her interest in the subject.

“Honestly, my senior year in high school, I had no idea what I wanted to do or go to school for,” said Reed. “In today’s world, you need a degree in just about anything to get a job so I chose the easiest thing for me.”

Reed, a resident of Williamstown, said she has always loved working on vehicles and just loved vehicles in general. She previously attended the Wood County Technical Center in Parkersburg, where she studied auto body and later went to work in a collision repair shop.

Reed said that despite that the work comes naturally to her, there are still challenges associated with the job.

“Some things are super hard to do,” she said. “I can’t exactly lift a whole lot of heavy things because I’m little.”

Reed said that physical work is a challenge associated with the job, but the biggest challenges that she is presented with is getting her name out there to eventually find a job at an automotive shop, and being a woman in a man’s world.

“Everyone has their own views on women being in a man’s workforce,” said Reed. “Most old-timers will look at you like you don’t belong in the shop and even some younger ones. Men think that way but it’s all about how you come across to people and how you show your value.”

Reed’s skill and desire for the auto industry earned her recognition as January’s Student of the Month at Washington State Community College.

“I don’t even look at her gender but rather her ability,” said Auto Diesel Assistant Professor Jeffrey Starkey. “She goes above and beyond in the classroom and she never turns her back on a challenge. Her communication skills with writing and speaking are excellent and her ability to show attention to detail will help her succeed.”

Reed is currently enjoying an internship at McMahon Truck Center in Marietta. She has long-term aspirations to move West and expand her skills in performance vehicles and race top-performance dragsters.