Microsoft’s (NASDAQ:MSFT) [stockdata ticker=”MSFT”] quarterly earnings report was published last month for the first quarter of 2014, where the company revealed how the decade old product line Microsoft Office and its latest subscription (SaaS) based Office 365 services have become its biggest sources of revenue. 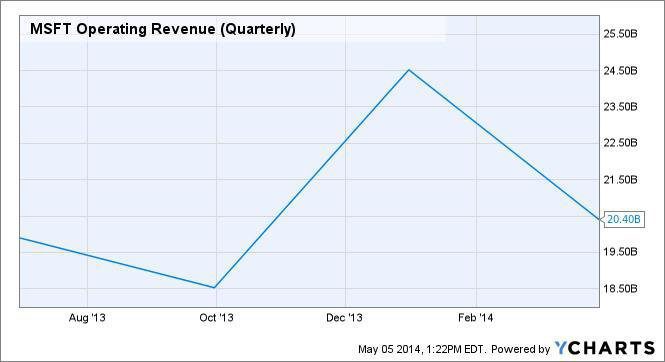 When Microsoft released the online only version of the Office suite, many analysts considered that it would have a cannibalizing effect on the “offline” Office products. However, segment by segment revenue data released by Microsoft proved that hypothesis to be wrong. Last quarter, Microsoft’s Office revenue increased as much as 15 percent on a year over year basis. This increase was excluding the subscription fees from the Office 365 service, which separately added around 1 million new subscribers during the first three months of 2014.

Since Google Docs offers similar functionality of Office 365 for free, it was difficult for Microsoft to market the product with a unique selling proposition (USP). So far, the software giant has managed to beat those odds. As of last quarter, Microsoft’s Office 365 subscriber base has reached 4.4 million.

What is more impressive about Microsoft is that the company’s Enterprise Office 365 increased its revenue by a mammoth 100% on a year on year basis. This commendably meant that Microsoft Office 365’s annual subscription base is now worth US$ 2.5 billion. As Microsoft’s operating revenue has been falling since mid-2013, the 100% increase in Enterprise Office 365 revenues has made it more important for the company, which is now representing 3.12 percent of the company’s total revenue on an annual basis.

When commenting on the last quarter’s performance of the company, Microsoft (NASDAQ:MSFT) [stockdata ticker=”MSFT”] Chief Executive Officer Satya Nadella said that “this quarter’s results demonstrate the strength of our business, as well as the opportunities we see in a mobile-first, cloud-first world. We are making good progress in our consumer services like Bing and Office 365 Home, and our commercial customers continue to embrace our cloud solutions. Both positions us well for long-term growth.”

The long term focus of Microsoft has definitely shifted from being a provider of Offline softwares to a more cloud centric strategy over the past few quarters. After all, according to market researcher Forrester, public cloud services will become a US$ 191 billion market by 2020, and Microsoft wants to place itself at the forefront of this modern day gold rush. Putting Office on the cloud will certainly help the company keep its growth momentum for next several years.