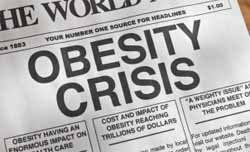 The World Health Organization has released figures showing that obesity is no longer a concern limited to first world countries. In fact, “65% of the world’s population lives in countries where overweight and obesity kill more people than health concerns from being underweight.”

Since 1980, the worldwide obesity rate has doubled with 1.4 billion adults being overweight at last count. The majority of these obese adults were women.

Obesity is determined as having a body mass index that is greater 30. Body mass index is a calculation based on the height and weight of an individual. It has been measured that at least 10% of the world’s population is obese.

A large number of children are also at risk for developing obesity. In 2011 more than 40 million children were reported as being overweight. Overweight is defined as having a BMI that is greater than 25. The majority of those children live in developing countries.

The rise in obesity is linked to a change in diet and activity worldwide. Consumption of high fat energy dense foods in combination with sedentary lifestyles has resulted in excess calories. The rise in urbanization has also changed the types of work and transportation available to people. This change has encouraged a more sedentary lifestyle.

Childhood obesity has separate implications, and poses more risks. Children who are obese are at a greater risk to develop obesity as an adult, die prematurely, or develop a disability as an adult. Obese children can also have trouble breathing, high blood pressure, or psychological damage.

Steps to prevent obesity can be taken at both the individual level and across societies. Everyone can potentially limit the amount of calories they consume and increase physical activity. The food industry can also make healthy food alternatives affordable and available on a global scale. Governments can ensure that all citizens have access to healthy food and activities.