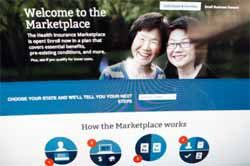 The president’s much touted health care plan continues to be plagued by embarrassing technical glitches, despite three years of preparation, the latest being where they are now resetting individual passwords.

In the days and weeks prior to the healthcare exchange going live on Oct. 1, president Obama consistently and adamantly insisted that the website would be ready to go and be up and running by the deadline. Critics across the industry attempted to sound the warning that despite the president’s proclamations, the websites were not ready to go and should not go live; however the president brushed aside their concerns.

Since that day, the website has become a nightmare for the administration as well as those attempting to use it. Individual attempting to log on frequently complain about it taking hours to merely create an account. The administration attempted to downplay these reports by saying it was due to the fault of the American people by too many people trying to log on at once.

However, critics pointed out that the administration had three years to get the system up and running and nearly unlimited taxpayer dollars to get it right. Over the weekend, officials said if the traffic to the site were reduced the system works just fine. In an attempt to resolve these issues the government brought the site down over the weekend, however it appears their fixes only made this problem worse.

It is now being reported that registrants are having to contact phone support after learning that all user passwords are being reset as part of a process to help resolve login issues with the site. Additionally, tech support is apparently telling some registrants they will have to completely reregister under a new username because their previously chosen names are stuck in a type of authentication limbo.

If the website problems persist, which all indications suggest that they will, into the near future it could prove extremely problematic for the Obama administration. While much has been focused on the public relations aspect of the failure of the site to meet expectations set by the president himself, there are real world practical considerations vital to the future of the law itself to be considered.

One of the key reasons the administration has dug in its heels over Republican attempts to repeal or delay the individual mandate for a year to match a similar action taken by the president in regards to the employer mandate, is that the individual mandate is crucial to the foundational underpinnings of the system.

The law setting up the system was designed around the idea that younger people who only make trips to the doctors infrequently will see their rates increase in exchange for fewer benefits in order to subsidize the elderly who frequently use the system more often. With this in mind, if young people do not sign up in large numbers for the exchanges, they could put the program in which some have called a death spiral. With each delay, the younger generation which has higher expectations for computing systems is more likely to simply decide to shun the exchanges altogether, which could put Obamacare in an untenable position.