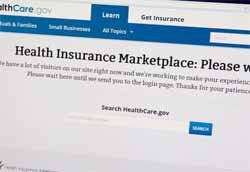 In an address from the Rose Garden, President Barack Obama pleaded with Americans to call in to sign up for Obamacare, insisting that the product was a good deal and promising he would fix the website issues.

In an appeal to Americans today in the Rose Garden of the White House, the president said that nobody was more “frustrated” than he was at the problems plaguing the HealthCare.gov website saying that his frustration meant that it will get fixed.

‘It “hasn’t worked as smoothly as it was supposed to work,” Obama said.

However, attempting to put a positive spin on what has turned out to be a debacle and embarrassment for the administration, the president said Americans should not judge his signature legislation based solely on the website, but should look at it in its totality.

Obama said it “is not just a website” and that there are other ways to obtain health insurance by using the old-fashioned way of “offline.” He then gave out the Obamacare phone number, saying the agents could help with the enrollment process.

However, talk-show host Sean Hannity called the number on his show and talked to an agent named Erlyne. Hannity said he was not able to successfully enroll on the website and wanted to know if she could help him.

While the president said agents such as Erlyne would be able to help him, she said she had a script to read from and that they could not help people like Hannity. She explained that the website was down for 42 hours and that the only people they could help were those who completed the enrollment process.

However, if a person could enroll online there would be no need to call the customer care number. She said the best thing to do is to wait for over 42 hours, then enroll and call them back.

The president said during his speech that so far Obamacare has exceeded his expectations and that just like he promised prices have come down.

“The prices are good,” Obama said. “People don’t just want it; they’re showing up to buy it.”

However, a recent report by the Heritage Foundation revealed that in 46 states insurance rates went up for most Americans.

Obama says he wants the website to work in order to get people’s money. One of the key foundations that is needed for Obamacare to work is for young people to sign up in droves in order to pay higher rates than many currently are paying in order to subsidize older individuals.

“I want the cash registers to work. I want the checkout lines to be smooth, so I want people to get this great product,” the president said.