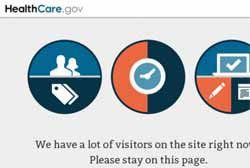 Despite millions of Americans being out of work, the Obama administration apparently decided that the job situation is not that dire and contracted with a Canadian tech firm to construct the healthcare exchange site healthcare.gov, which has been plagued with a series of glitches since its launch on Tuesday.

While critics have been sounding the alarm for months that the health-care exchanges, a key linchpin of the president’s “crown jewel” of Obamacare, the president dismissed all concerns insisting that the system would be ready on Oct. 1. However, when the system went live it reinforced what the critics were saying as the system has been plagued with numerous glitches.

The glitches have been so severe that the media went out of their way to show their excitement over a single individual who was able to sign up using the website healthcare.gov. The president has attempted to downplay all of the issues saying that even companies such as Apple have had technical problems when they unveil a new device.

However, critics have pointed out there are several key differences, noting that no one is forced to buy an Apple iPhone. They also point out that the federal government has had to 3 ½ years and nearly unlimited resources to get the systems up and running and they still have a multitude of problems. Critics of Obamacare have cited this as an example of government inefficiency and highlighted why the government should not be take over the healthcare industry which will involve them taking over approximately 1/6 of the US economy.

Serge Godin, chairman of the company, leads the corporate colossus that has resources including a market capitalization of $8.9 billion, making it worth over $1 billion more than the other major Canadian tech firm, Blackberry.

The US Department of Health and Human Services has already awarded GCI $55.7 million to launch healthcare.gov. The company is also the one that provide service to Canada’s single-payer healthcare system, which some have said is the future of American healthcare if the president has his way.