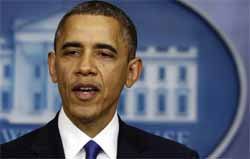 What was once the staple of late night comedy and bad movies is now becoming a reality, as the Obama administration is bowing to pressure from environmentalist groups and plans to require dairy farmers to prevent their cows from “passing gas.”

The issue at hand involves the extent to which cows and other animals, including humans, produce methane gas in the form of flatulence. The White House is now appearing to take the issue so seriously that it plans to make the dairy industry reduce the amount of methane produced by cows by 25 percent by 2020, the Daily Caller reports.

The subject of cow flatulence has long been an obsession with environmental groups to such an extent that it has become the subject of ridicule. Comedian Paul Shanklin has produced a parody skit where former Vice President Al Gore goes up to a cow with a cork to prevent methane emissions, with disastrous results as the methane has nowhere to go.

However, for small farmers who would be forced to comply with the regulations, the issue is no laughing matter.

In a 2012 study charting greenhouse gas emissions, the EPA attempted to blame cows for global warming.

“Of all domestic animal types, beef and dairy cattle were by far the largest emitters of [methane],” the EPA said. “During digestion, microbes resident in an animal’s digestive system ferment food consumed by the animal,” the EPA notes. “This microbial fermentation process, referred to as enteric fermentation, produces [methane] as a byproduct, which can be exhaled or eructated by the animal.”

The attempt to regulate what has been a staple of American agriculture going back to the founding of the country may strike some as odd, but it is not the first time the EPA has proposed regulating a common element featured on all farms.

In 2011, the EPA admitted under testimony before Congress that it had the authority to regulate dust on farms.

The admission came during debate on a bill co-sponsored by Colorado Rep. Cory Gardner, who is currently a Senate candidate in the state. Gardner’s bill would have prohibited the EPA from regulating farm dust.

Democrats argued the vote was unnecessary since the EPA had no plans to regulate dust. However, during a congressional hearing Gardner was able to get the agency to admit they did feel they have that authority.

Under questioning by Gardner, Gina McCarthy, EPA Assistant Administrator for the Office of Air and Radiation, was asked if the EPA currently regulated dust.

After attempting to avoid answering the question, McCarthy then went on to say they do in fact have national regulations on dust, which could conceivably cover farms. “We do not directly regulate farm dust, we have do not have farm dust regulations. We have national standards that regulate coarse and fine particles.”

“In areas where farm dust contributes to non-attainment and imposes health concerns there is a right and obligation to take a look at those issues,” McCarthy continued. “I don’t see anything wrong with that, in fact I see that as a good practice to continue.”