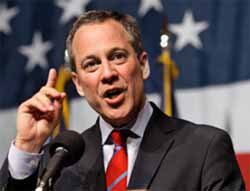 New York’s Attorney General Eric Schneiderman is pressuring lenders to take more responsibility for the scores of abandoned homes to avoid blight. Legislation backed by Schneiderman would require banks to quickly address “zombie” properties after they are abandoned by owners.

“We will make sure that a bank that enters into a foreclosure proceeding cannot simply walk away and leave a house to fall into ruin,” Scheiderman is expected to say when he announces a plan on Monday to the state Conference of Mayors to address the thousands of abandoned properties throughout New York.

Thousands of homes have been abandoned by owners and lenders and are not maintained because banks do not complete the foreclosure process. This leaves these homes vulnerable to vandalism, arson, crime, and general decay.

The legislation would create a statewide zombie property registry, allowing municipalities to track abandoned houses and enforce maintenance codes. Schneiderman has also proposed a second bill that would double the number of nonprofit land banks in New York that may buy abandoned, vacant, or foreclosed properties to rebuild or demolish them. Despite a great need, New York City has no land banks.

According to Michael Vatter, Newburgh, New York Fire Chief, “homeless people call the bank-owned zombie houses abandominiums.” He toured a burned-out home near a playground that had been destroyed by a fire months ago, but not torn down. According to Vatter, the home is owned by Wells Fargo, and before the fire, it was a “drug-shooting gallery and flophouse” for prostitutes in the area.

Newburgh has a population of about 30,000 and sits 60 miles north of New York City. 10% of all homes in the city of Newburgh are in some state of abandonment, and the city was hit hard by big companies leaving during the recession. The city is also battling high crime and unemployment.

While Vatter welcomes legislation to create a registry, he says it will be almost impossible to get banks to take responsibility for the properties. While speaking to the New York Times, he recalled a time when residents tracked down the bank that owned an abandoned home. The only step the bank took was hiring someone to cut the lawn.

New York has about 15,000 zombie properties and leads the country in the time necessary to foreclose on a home at nearly three years, according to RealtyTrac.

The changes Scheiderman proposes will not be easy, as city officials, homeowners, and banks disagree on what is considered abandoned. He proposes a clear definition of the term. The legislation would define a home as abandoned if a bank has not received mortgage payment for a specific number of weeks, with other conditions, such as broken windows, taken into consideration.

If the bill is passed, banks that do not register an abandoned property will be fined up to $1,000 per day for each property that is not in compliance. Banks would also be obligated to notify homeowners of their right to stay in the home until a judge has signed off on the foreclosure proceeding.

Banks are facing growing criticism for not maintaining properties. The National Fair Housing Alliance, a representation of housing groups that fight discrimination, filed complaints with the government alleging some banks have failed to maintain homes in minority areas.