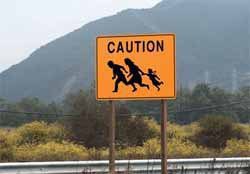 While recent news has been focused on the recent trend of children coming across the U.S. border from Mexico and the steps the government is taking, another problem appears to be cropping up, the possibility of infectious diseases spreading.

Channel 15 ABC in Arizona is reporting that border patrol agents are now sounding the alarm that with illegal aliens, being shipped to the state and other states, the potential for a viral outbreak has increased significantly.

According to Cabrera, in the detention facilities the only thing separating the sick from the healthy is caution tape.

“There’s been an outbreak of scabies that’s been going on for the past month,” Cabrera said.

Another healthcare concern is that many illegal immigrants have not had the vaccinations that Americans have long received and have the strong possibility of bringing drug-resistant strains of diseases that have long since been eradicated, such as tuberculosis, with them.

Tuberculosis is a bacterial infection that generally attacks the lungs, although it can attack any part of the body. The disease is easily spread when an infected individual coughs, sneezes, or even talks in the presence of another person. If not properly treated the disease can be fatal.

The disease has been around since ancient times, and Tuberculosis was once the leading cost of death in America. Among the disease’s victims was the legendary Doc Holiday who died in a tuberculosis ward in Colorado Springs.

In the 20th century, antibiotics were developed which resulted in the disease being virtually eradicated in America in the 1960s. However, in recent years the disease has been making a comeback with new strains that are resistant to most antibiotics.

Besides California and Florida, the states with the greatest number of multi-drug resistant TB are Texas and New York. All of these states have large numbers of illegal aliens within their borders. Florida was recently ranked as having the third largest illegal alien population by the Department of Homeland Security. Many of the illegals in Florida come from the Caribbean and other countries in the Southern hemisphere. Some of these countries have widespread problems with tuberculosis.