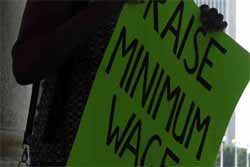 The Employment Policies Institute recently released a study on the impact that raising the federal minimum wage to $10.10 will have on the economy. The news is grim, as an estimated 360,000 to 1,084,000 jobs would be eliminated across the country according to the report.

Michael Saltsman, research director at the Employment Policies Institute, released a statement noting, “No amount of denial by the President and his political allies- and no number of ‘studies’ published by biased researchers- can change the fact that minimum wage hikes eliminate jobs for low-skill and entry-level employees. Non-partisan economists have agreed on this consensus for decades, and the laws of economics haven’t changed. Instead of raising small businesses’ labor costs and creating more barriers to entry-level employment, the President and the Senate should focus on policies that help reduce poverty and create jobs.”

Michael Saltsman is echoing the sentiments of not only people more inclined to fiscal conservatism, but a large amount of economists as well. The Employment Policies Institute used analysis from economists at Miami and Trinity University, and their conclusions continue years of general economic observations regarding the negative impacts of raising the minimum wage.

The Senate is expected to vote on a bill that aims to raise the minimum wage from $7.25 an hour to $10.10 an hour. This 40 percent increase in the minimum wage will act as a major price shock to American businesses. Small businesses in particular will be hit hard by the rise in employment costs.

This study by the Employment Policies Institute is being released at an inconvenient time for Democrats who have been arguing that you can raise minimum wage without damaging the employment rate.

The methodology of the EPI study involved taking Census Bureau data from 2012 and 2013, and using said data to calculate how much each individual state would be impacted by a rise in the minimum wage.

Larger states such as California and Texas are expected to be more negatively impacted than smaller ones. The economists in the study found that California could lose around 100,000 jobs, and Texas could lose up to 128,000 jobs.

The Employment Policies Institute commented on its findings, noting, “The vast majority of economic research from the last two decades confirms that a higher minimum wage reduces employment opportunities for the least-skilled jobseekers. This consensus has only been strengthened in recent years, including by a study forthcoming in Cornell University’s labor relations journal that refutes the research President Obama and Senate Democrats are relying on to make their case.”

The minimum wage legislation in the Senate is not likely to ever be passed by both houses and signed into law, as the Republican party holds a firm majority of seats in the House of Representatives.