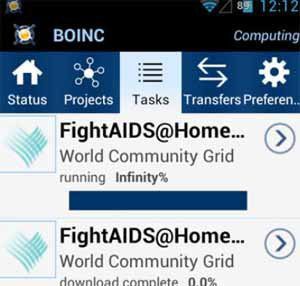 Some smartphone apps are getting more relevant to humanity. A newly launched app for Android devices enables its users to donate to scientific research against the fatal AIDS without directly asking for monetary donations. The user just has to turn on the app and let it open while he does other activities.

The app, known as BOINC or Berkeley Open Infrastructure Network Computing, would automatically donate the unused computing power in a smartphone or tablet to the advancement of scientific research. Users don’t have to worry because the program would only work when the device is connected to Internet via Wi-Fi. That means it would not eat up on user’s data plan. It would also work only if the device is fully charged or if it is plugged into a charger to avoid battery draining.

How the project works

How would it work? The app would harness the extra CPU cycles of the mobile device to possibly help crunch data that would be helpful to scientific efforts. The network of donating devices would comprise a quasi-supercomputer that would be available for use by researchers.

One of the research endeavors that could be supported through BOINC is [email protected] The project is conducted by researchers who are developing new drugs for treating the HIV virus, which in turn would eventually lead to AIDS. The scientific effort is conducted by the Olson Laboratory and The Scripps Research Institute. It is in partnership with IBM’s World Community Grid that has already sponsored tens of scientific research efforts over the last 10 years.

Donating another kind of support

The crowd-source supercomputer output lowers the overall cost of conducting research for scientists. Rental time on supercomputers could be costly for non-profit research bodies as those may cost more than $1,000 each hour. Through this project, scientists could access more power without incurring expenses.

Since its launch on July 22, BOINC has been downloaded by up to 30,000 Android device users from the Google Play Store. One factor that makes users rave about it aside from its relevant cause is its unobtrusive nature. It would only run on Android 2.3 and later versions. It is expected that more projects using the Android app for soliciting donations would be introduced in the coming months or years. Its developer is also taking time to create and offer its iOS version soon.