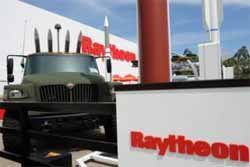 Raytheon Co. has announced that it has won a major contract from the U.S. Navy. The contract involves building radars for air and missile defense. Based in Waltham, Mass., the defense contractor has said that it is designing the radar for the Flight III Arleigh Burke destroyer, starting in 2016.

While the initial project is worth $385.7 million, the entire value of the project could increase to $1.6 billion if options are exercised, according to the company.

Raytheon’s shares fell 21 cents, leveling off at $76.05 during afternoon trading on Friday. They have increased significantly, 39 percent, during the last year. Many experts refer to Raytheon being awarded the contract as a “breakthrough victory.” The company has repeatedly beaten out the competition for recent contracts that focus on the development of next generation combat systems. Competitors for this project included Lockheed Martin and Northrop Grumman.

The loss of this contract may be considered a major setback for Lockheed Martin. Lockheed Martin has literally dominated the naval electronics market for at least a generation, gaining support from its status as a prime contractor on the Aegis combat system.

Its success with that project turned into an ongoing list of continuous successes. Aegis is considered the most capable missile defense system that has ever been deployed on land or sea. Back in March, when it was announced that Lockheed Martin won a major competition to serve as the lead integrator on that program all the way through 2018, it was assumed that the company’s dominance of the naval electronics project realm would continue.

Looking at Northrop Grumman, it seems as though their place in the competition would have been a longshot. The company is known to have its expertise elsewhere, so some were surprised they even got in the running. Just this past July Raytheon won the Navy’s Next Generation Jammer competition against Northrop Grumman, who is the incumbent on the existing jammer and who was the expected victor.

Winning such significant bids, Raytheon has definitely impacted its revenue for decades.