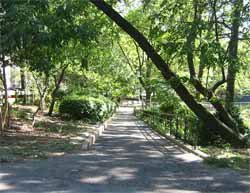 In what could cause a further rift between the Muslim community and the New York City Police Department have come allegations that two Muslim sisters were allegedly thrown to the ground, put in chokeholds while having their hijabs violently torn off and they are not sure why.

Lamis Chapman and Khalia Wilson, aged 12 and 14 respectively, told the New York Daily News that the incident occurred while there were playing handball around 9:30 PM in the park near their home in the Bronx when police approached and asked them to leave saying the park was closed.

As the girls were leaving the park they say the police follow them and one grabbed Wilson from behind, wrestling her to the ground while putting her in a chokehold.

“They said they asked for ID. I didn’t hear them,” reported Wilson. When her sister protested, she was also thrown to the ground, and both sisters’ headscarves were ripped off. “I kept saying, ‘I’m 14! What are you doing? We’re not bad kids,'” explained Wilson.

Their 15-year-old brother, Shytike Wilson, seeing the police assaulting his younger sister from a window, ran to their aid. “I asked them why my sisters were in handcuffs,” he said, when the police, “charged me, picked me up, and slammed me on the floor.”

Another individual, 18-year-old college student, Jonathan Harris, became involved when he heard the girls screaming and ran to the park to help. After telling the police to leave the teams alone he began to take out his cell phone to record the incident and then became subject to police abuse himself.

Harris said the officer told him, “Come here, you little –er. You like recording?” He says he tried to run away, but the officers caught and threw him to the ground, while pepper spraying and punching him.

However, according to a police source, “The officers told the kids to leave (the park) when they began acting disorderly,” and that while the police were escorting them out of the park Harris grabbed one of the girls away from the police. As a result, Harris was charged with “disorderly conduct and obstructing governmental function,” and the police reported that two officers were hospitalized with “scrapes, bruises and sprains.”

The incident has the potential to further strain tensions between the NYPD and the Muslim community following a stream of bad publicity over the city’s controversial stop and frisk policies as well as reports of widespread surveillance of Muslims in their communities in the wake of the 9/11 attacks.