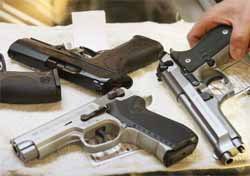 Following the enactment of concealed carry legislation in Illinois, Chicago’s murder rate fell to the lowest levels since 1958 almost immediately.

Gun control groups have often mocked gun rights groups who say the best way to prevent gun violence is to make it easier for law-abiding citizens to own and possess firearms, claiming the problem is too many guns.

However, studies have consistently shown that the states and local governments with the least restrictive gun laws also have the lowest violent crime rates, while the opposite is true in cities such as Chicago and Washington D.C., which have some of the nation’s most restrictive gun control laws and frequently have the highest crime rates.

However, new crime statistics for Chicago should serve to put the question of which group is right to rest.

The Chicago Sun-Times, citing newly released police data, noted that in the first quarter of 2014 the city recorded the lowest numbers of homicides than at any time since 1958.

In 2012 and the first part of 2013, the city was facing an epidemic of homicides that were even surpassing the death of soldiers in Afghanistan, prompting some to point out that a person was safer fighting the Taliban than they were walking the streets of Chicago.

The city has had a longtime ban on handgun ownership and possession of a long gun is also heavily restricted. The requirements were so strict; they prompted a lawsuit that went all the way to the Supreme Court over the city’s licensing requirements. The court ruled that the Second Amendment right to keep and bear arms by individuals applied to individual states.

While other states have long had concealed carry laws to some degree or another, Illinois did not allow citizens that right. However, last year for the first time the state and Chicago legalized concealed carry, and ever since, the murder rate in the city has seen a decline.

While it is too early to tell if this is part of a long-term trend or not, it does appear to back up other studies that have shown that increasing the ability of citizens to carry concealed weapons helps lower the crime rate.

However, Chicago’s Police Supt. Garry McCarthy appears to not be willing to see even the possibility that the concealed carry law is having any effect on the crime rate. In fact, McCarthy told ABC News that the new law would cause the murder rate to go even higher.

“We’re going to have tragedies from this,” McCarthy said regarding concealed carry in Chicago. “The answer to gun violence is not more guns — it’s less guns.”