Regardless of how stalled Microsoft Corporation’s (NASDAQ:MSFT) [stockdata ticker=”MSFT”] business seems to Wall Street analysts, the fact of the matter is that this company powers 90.73 percent of the Desktops and Notebooks around the world. Its nearest competitor at second place is Apple’s (NASDAQ:AAPL) [stockdata ticker=”AAPL”] Mac operating system which has only 7.54 percent market share. 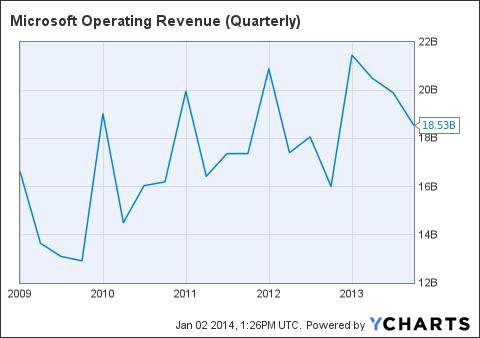 The gain represents a fundamental shift in the Windows userbase, as Windows XP users were forced to abandon the platform as Microsoft is discontinuing support and security updates for XP from April 8, 2014.

As Windows 8.1 was offered as a free upgrade, it will not provide Microsoft (NASDAQ:MSFT) [stockdata ticker=”MSFT”] with any revenue gain. However, discontinuing Windows XP will eventually drive the sales of Windows 8.x operating system further up over the course of next few quarters. Back in the first quarter of 2013, Microsoft’s revenues went up 24 percent (in the first three months) compared to the previous year’s first three months; as Windows 8 sales pushed revenues of the Windows division alone to US$ 5.7 billion from US$ 4.633 billion. However, overall as a company, Microsoft’s revenue has been declining since the start of 2013.

In the third quarter of 2013, Microsoft generated only US$ 18.53 billion revenue from its operations, indeed a sharp decline.

However, Microsoft has maintained profitability since the sharp decline it observed during the first two quarters of 2012. As of the third quarter of 2013, its EBITDA has gone down amid declining operating revenue but earnings per share is still at US$ 0.63.

However, sales estimates are looking good for Microsoft this year, the current estimate is set at US$ 25.05 billion by the end of 2014. Microsoft has a lot of new guns to fire this year in order to generate revenue instead of solely relying on its Windows division. The Surface line of products is doing well, as its sales doubled in the third quarter of 2013. Moreover, Microsoft is partnering up with various low cost phone manufacturers in the emerging market segment to sell Windows Phone 8 based cheap phones. Rumors include a deal between Microsoft and Micromax, an Indian phone manufacturer, and even Sony may have joined the bandwagon. 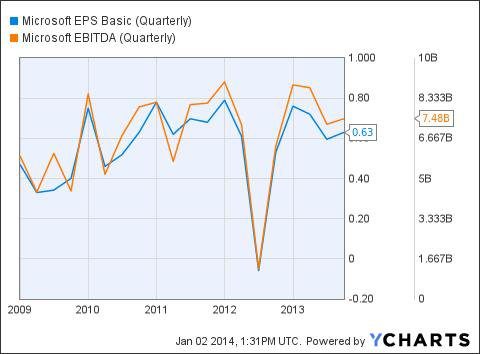 Based on the growth forecast, Zacks just upgraded the company from “underperform” on December 19, 2013. If anyone is looking for investing in an established blue-chip company with growth in mind during 2014, Microsoft (NASDAQ:MSFT) is a good option right now, as the 1 year forward P/E is only at 12.86. 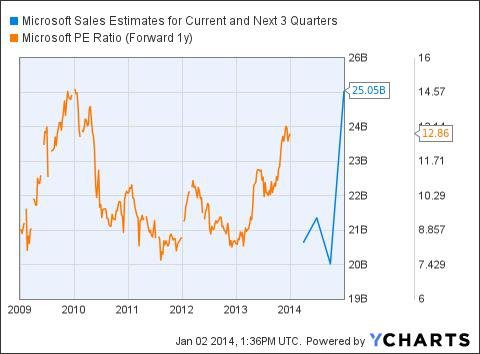