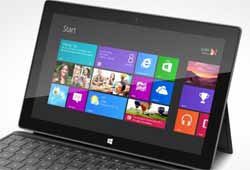 Microsoft Corp has earned revenue of $853 million from sales of its Surface tablets in the fiscal year that ended last June 30. That was revealed in the software company’s annual report that was filed with the US Securities and Exchange Commission. The two tablet PCs, Surface RT and Surface Pro, were launched in October 2012 and February this year, respectively.

The problem with that figure is that it did not even cover the $900 million charge Microsoft incurred against its profits for marking down price tags of the still unsold units of the first model of Surface tablet. Thus, the company actually lost money for providing discounts just to dispose the inventory for the product.

Aside from that cost, the filing also disclosed that it spent $898 million for advertising both Surface tablets and its newly launched Windows 8 operating system during the last fiscal year. The total amount the company shouldered for its sales and marketing efforts rose 10% to $1.4 billion compared to the overall cost of its sales and marketing in the previous fiscal year. That means that the launch of the products had been costly for Microsoft.

The technology firm did not disclose the volume of shipments for its Surface tablets so far. However, data from market research group International Data Corp (IDC) indicated that 9,000,000 units of combined Surface RT and Surface Pro tablets were shipped in the first quarter of this year. In a separate statement, Microsoft hinted that the two tablets were significant factors in the increase of its overall production costs.

It should be noted that the Surface line of tablets marked Microsoft’s first ever foray into manufacturing of its own devices. For the longest time, the company has been profitable when it focused only on its important and widely used software products. According to industry analysts, it disappoints that the company’s first attempt to rule the segment did not succeed.

Microsoft admitted that the Surface tablets were designed and manufactured to compete with rival Apple Inc’s very popular iPad. When it launched the first model, it was hopeful the venture would at least be profitable. The launch of the second Surface tablet model did not help boost the product line’s performance.

ASUS, another user of the new Windows RT also expressed disappointment over the new OS’ attractiveness to consumers. The company uses the OS for its own VivoTab RT, which also incurred disappointing sales.