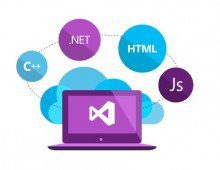 If you have ever used Microsoft’s Visual Studio Express edition, you would know that there are a lot of limitations in this free version of the software. However, starting November 13th, you have access to many more features, thanks to the new Visual Studio Community 2013 Edition which will replace the old Express Edition which has been available to download for the past few years.

Microsoft has made a number of changes in the past few months under the leadership of Satya Nadella which includes making Microsoft Office for Android and iOS completely free. So, this move is not that surprising.

Unlike the earlier Express Edition where you didn’t have access to various extensions from the Visual Studio Gallery, the new 2013 Community Edition brings all the 5,100 extensions available to the user. You have almost all features that you would get in a full version with only a few limitations like the lack of enterprise settings and the ability to add more than five members to the team.

So, it’s basically aimed at students, small companies, open source contributors, individual developers and startups. You get access to every tool necessary to create non-enterprise applications on a number of environments like cloud, web, desktop etc.

With this edition, you also get a number of Visual Studio tools like Peek, Blend, Graphical Debugging, full C# Refactoring, Code Analysis etc.

“The simple way to think about this is that we are broadening up access to Visual Studio,” Microsoft corporate VP of its Developer Division S. Soma Somasegar told TechCrunch last month. “It’s a full features version of Visual Studio, he noted. It includes the full richness of the Visual Studio extensions and ecosystem.”

So how does Microsoft plan to generate revenue from a free product like the Community Edition?

Well, it’s actually quite simple. They are adopting the same model used by thousands of software vendors around the word: A Freemium model.

Microsoft is developing a number of paid tools to assist the developer in the process of making the application. The company believes that it would be able to convince these Community Edition users to pay for these tools.

While the Visual Studio 2013 Community Edition is meant to replace the Express Edition, the latter will still be available to download for a few more months.