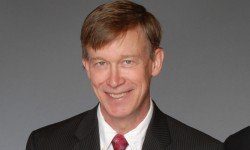 The office of Colorado Governor John Hickenlooper has announced that tax revenue derived from marijuana sales in the state has surpassed initial projections by almost $30 million. This is a major windfall for Colorado, as the new revenue comes from a 10 percent tax on retail pot.

Initial estimates pinned the annual tax revenue that will be derived from marijuana sales at $70 million. After just seven weeks of retail sales, this estimate is being upgraded significantly.

The Daily Caller reports that “In a letter to the chairman of the Joint Budget Committee, Hickenlooper is asking for $45.5 million toward youth marijuana use prevention; $40.4 million for substance abuse treatment; $12.4 million toward public health; and $5.2 million toward law enforcement, regulatory oversight and coordination activities.”

The state legislature needs to approve this proposed allocation of marijuana tax funds before they can go into effect.

Getting his spending plans approved may prove to be fairly difficult for Governor Hickenlooper, as pro-marijuana advocates are arguing that the proposed spending measures portray marijuana use in an overtly negative light.

“Gov. Hickenlooper’s proposal flies in the faces of voters who expected marijuana to be treated similarly to alcohol. Voters approved Amendment 64 because they wanted to put an end to government-run anti-marijuana campaigns, not fund new ones. The governor should explain why he feels all of these new marijuana-related programs are necessary when the health and safety of teens are threatened to a much greater degree by alcohol use and prescription drug abuse,” said Brian Vicente, who is one of the co-directors of the ‘Yes on 64’ campaign.

Critics are pointing out the perceived hypocrisy in Hickenlooper’s spending plans. The Colorado governor made his fortune running a brewery in Denver before entering the political world. Marijuana proponents argue that Hickenlooper’s attempts to limit marijuana use are disingenuous considering the fact that his pre-political career consisted of manufacturing and selling alcohol.

Mason Tvert, the communications director for the Marijuana Policy Project, also had a few critical words for Hickenlooper, and wrote in a press release, “How can the governor justify focusing our state’s limited drug education and prevention resources on a substance that is less harmful than one he made a fortune selling?”

Vincente also argued, “We have an incredible opportunity to chart a new course in the state when it comes to teen substance use and abuse. We hope the legislature will approach this issue more thoughtfully than the governor has.”

The marijuana lobby is sure to pressure the state legislature into altering the proposed spending allocations, as increased awareness campaigns can pose a serious threat to their bottom lines.