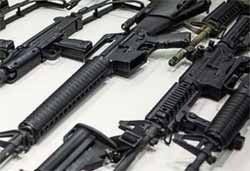 In a new twist on the gun control deabte, a Democratic senator from Massachusetts wants to mandate that guns be sold with technology that doesn’t exist.

Sen. Edward Markey introduced a gun control bill that would require all new guns sold to feature technology personalizing them so that they can only be used by its owner or other authorized persons.

Markey claimed his bill would reduce the number of policemen killed in the line of duty since many of them are killed by their own guns after a perpetrator takes it from them during a struggle. He also claims it would make it impossible for children to hurt themselves with their parents guns.

The bill would require all new firearms to feature the personalization feature within two years of the bill’s passage. While most laws feature a grandfather clause, Markey’s bill does not and would require all existing firearms, regardless of age to be modified and retrofitted with the new technology before it could be sold to a collector or other person. The requirement would effectively destroy the collectible value of any historic firearm.

There is just one problem with Markey’s bill, the technology to do so does not exist and current attempts to develop such a gun are unreliable, which could prove problematic for the legitimate owner.

Recognizing that gun control is a losing issue politically, gun control advocates frequently dispute claims they are anti-Second Amendment, claiming they support gun ownership. Recently,  they have begun to shy away from the gun control label, attempting to claim their restrictions are “gun safety” rather than gun control.

The change in terminology came about following a pair of Supreme Court decisions that held that the Second Amendment  is just as much an individual right as the First Amendment right to free speech and freedom of the press.

The problem is, while politicians may think simply passing a law can fix a problem, the technology required in Markey’s bill does not exist yet, and the legislation will not automatically create it. The Gun Owners Action League of Massachusetts said that Markey’s smart guns “only work correctly in the movies.”

“No technology should stand between a lawful gun owner using his/her firearm,’’ the group said in a written statement. ‘‘We also find it more than disingenuous that a senator with very little knowledge of firearms, who has worked to stifle the Second Amendment, would offer mandated technology that gun owners have not asked for, nor supported.’’

Markey’s move is part of a recent strategy by gun control advocates to use regulations to effectively ban firearms such as imposing a tax per bullet that is so high it makes purchasing ammunition cost-prohibitive.

In 2011, the Greeley Gazette reported that Sarah Brady, Chair of the Brady Campaign, a staunch gun control group, claimed that during a meeting in the White House, President Obama came in to see her to “fill us in that it [gun control] was very much on his agenda” and told her, “I just want you to know we are working on it. We have to go through a few processes, but under the radar.”