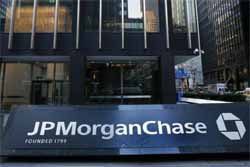 Wells Fargo and JP Morgan Chase, the two largest mortgage lenders in the U.S., are feeling the sting from smaller firms as mortgage originations drop at the fastest rate in three years. While large banks still dominate the mortgage market, their dominance is waning with smaller lenders, some of them very new, grabbing market share.

New loans at Wells Fargo fell 38% to $50 billion in the 4th quarter, while originations dropped 42% to $23.3 billion at JP Morgan Chase. This far outpaces the 27% fourth quarter drop projected by the Mortgage Bankers Association.

Large banks are dealing with increased competition as well as a significant drop in mortgage refinancing after the Federal Reserve announced it will reduce its monthly bond purchases to allow rates to increase. Refinancing helps large lenders primarily due to their size and the scale of their mortgage servicing platforms, and they will be forced to change operations as the market changes.

Smaller lenders are being helped by a market that’s shifting from refinances to home purchases, allowing firms to capture the attention of home buyers, according to Clifford Rossi, a former Citigroup risk manager.

“A lot of these guys are using the internet and social media platforms to reach borrowers more directly,” he said. Because of their “ability to be more nimble and opportunistic in the marketplace, you will see more companies like that able to do more.”

Top lenders are also letting go of workers by the thousands as refinancing demand drops, while smaller lenders pick up steam.

Many small lenders credit local expertise and an emphasis on customer service as leading reasons for their rapid growth.

Fannie Mae predicts this market shift is temporary, and large lenders still have a large advantage, in part because they can spread fixed costs across a bigger volume of transactions. As the market improves and concerns about risk lessen, major banks will probably take back their market share.