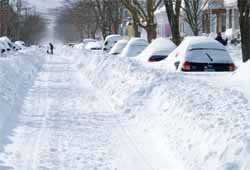 Secretary of State and former presidential candidate John Kerry is facing blowback over his comments that global warming is the “world’s most fearsome weapon of mass destruction,” placing it above events such as a biological attack or a thermonuclear war.

The remarks were made by Kerry during a speech while addressing students and government officials at an American cultural center in Jakarta, the capital of Indonesia, over the weekend. During his speech, he likened global warming to a war, and claimed that citizens of Indonesia were the front line troops during the war.

Kerry went on to reiterate claims made by others, such as former Vice President Al Gore, who predicted the polar ice cap would be completely melted by 2013. Kerry did not address Gore’s false prediction, but went on to say that melting ice caps would continue to cause rising sea levels. According to Kerry, by the middle of the 21st century, half of Jakarta will be underwater.

There are reputable scientists who dispute that the earth is warming and even assert that the planet is currently in a period of global cooling, and among adherents of global warming, there are those who question the extent to which man is responsible for it. They point out that the planet has gone through warming spells before the advent of the industrial revolution, and point out that man could not have been responsible for these cycles. Instead, some have said solar activity and other natural phenomena is a better indication of global warming.

Interestingly, as Kerry was taking industrialized nations to task for CO2 emissions, his trip was nearly disrupted by the eruption of Mount Kelud, which disrupted air travel in the region and forced Kerry’s meeting with President Susilo Bambang Yudhoyono to be postponed.

Kerry’s claims that global warming is a more dangerous threat than other threats facing America today drew fire from former presidential candidate Newt Gingrich, who expressed disgust with Kerry’s comments in a tweet saying that for a secretary of state to make such a claim was “dangerous to our safety.” He even called for Kerry’s resignation.

“Does Kerry really believe global warming is more dangerous than North Korean and Iranian nukes? More than Russian and Chinese nukes? Really,” Gingrich tweeted. “Every American who cares about national security must. Demand Kerrey’s [sic]  resignation. A delusional secretary of state is dangerous to our safety.”