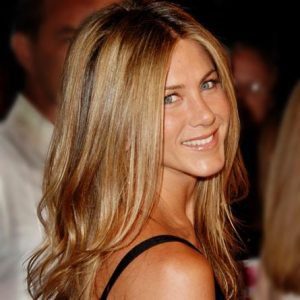 One of the Friends’ main cast members, Jennifer Aniston, who played the role of Rachel Green, speaks out about the cast’s opinion on the show’s theme song I’ll Be There For You for the first time. This song is one of the most famous soundtracks ever made, and the Friends show is absolutely unimaginable without it and the scene of dancing in a Central Park fountain – which is actually shot in a Warner Bros Studio.

For all the Friends’ fans, this song by The Rembrands is a lovable sound which announcing start of a new episode. But for Jennifer Aniston, Courteney Cox, Lisa Kudrow, Matthew Perry, Matt LeBlanc, and David Schwimmer – the cast of this show – the things were litle bit different.

“No one was really a big fan of that theme song,”, said  47 years old gorgeus American actress, to the host Matt Baker on the BBC’s The One Show. Jenn came in the show for promoting her new movie Office Christmas Party. She continued saying:

’’Do you hear that? That’s the sound of every ’90s child erupting in crocodile tears!“

Except for for the song itself, she confesses that the dancing in the fountain was also one of the things the cast disliked. “We felt it was a little…I don’t know… Dancing in a pond? A fountain felt sort of odd… But we did it.“ The fact that they did it only because the were told to is a litle bit disappointing for all Friends lovers who enjoyed this opening scene.

But Jennifer Aniston reruns this TV series just like any other fan. “Yeah, I can’t help it!“, said the actress in the BBC interview, ’’First, I’m trying to remember which episode it is and half the time I’m saying to myself – I don’t remember that.“

She also confesses that she’s missing the show: ’’You get sucked into the nostalgia of it.”

Friends show has 10 seasons and 236 episodes in total. This show was filmed from 1994 to 2004 is one of the most loved and reruned shows of all times.

L.J is a contributor covering financial, entertainment and politics news. A freelance writer for various online publications with a great interest in real estate investment.