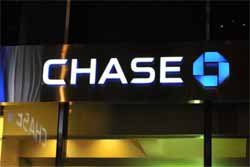 New reports that Chase Bank is preparing to limit withdrawals for business customers has caused some to wonder if the bank has inside knowledge about a possible upcoming financial calamity facing the United States.

Infowars first reported that they had received copies of letters sent by Chase Bank to numerous customers with Chase BusinessSelect Checking and Chase BusinessClassic accounts advising them that cash activity (both deposits and withdrawals) will be limited to a $50,000 total per statement cycle from Nov. 17 onwards.

In the letter the company states the reason for limiting cash withdrawals it is to “help us more effectively manage the risks involved with these types of transactions.”

Alex Jones, founder of Infowars, confirmed the information in the letter was accurate by going into a Chase Bank where he inquired about setting up an account. Jones asked a bank employee if he would be able to wire money out of the country or withdraw the amount of cash listed in the letter. According to Jones, the bank employee told him he would not be able to do so unless he qualified for a special type of international bank account which would require him to deposit huge amounts of money and pay fees to be able to access the services.

Jones said this news should be alarming to Americans, especially when one considers that Chase is one of the largest banks in the world.

“What this constitutes is a war on cash and a war on small business and individuals,” Jones said. “Two years ago we saw a giant backlash against Bank of America when they announced customers would be charged for using their own money via their debit card. We have crossed the rubicon where now the currency has been so devalued that you will have to pay fees to have your money in a bank or use a debit card.”

The new policy by Chase, which so far appears to be the only bank implementing the policy, is especially noteworthy when one considers that JPMorgan Chase is the financial institution tasked with running the majority of the welfare system in America, including the EBT cards, commonly known as food stamps. As such, Chase essentially constitutes the top of the financial corporate-banking government structure.