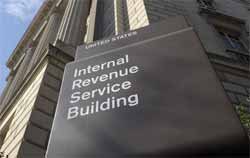 In a report that will embarrass some Democrat leaders and vindicate their Republican counterparts, IRS inspector general J. Russell George confirmed in a report last week that conservative organizations sending applications to the IRS for tax-exempt status were not just given additional scrutiny in the process, but were actually targeted by the agency in an attempt to interfere with their support of conservative political speech. In a report released on April 3, 2014, the Inspector General said that while 30 percent of organizations that applied for special status and had the word “progressive’ in the name of their organization were subjected to some scrutiny, 100 percent of groups with any of the words, ‘tea party,’ ‘patriot,’ or ‘9/12’ in their names were made to undergo invasive questioning and unreasonable delays.Within hours of the report’s release on Thursday, Daniel Werfel, acting IRS chief who replaced predecessor Steven Miller when he resigned after the scandal broke, said he did not disagree with the Inspector General’s conclusions.

Political bias is at the heart of the scandal. Republicans claim that the mega- powerful agency used its power and influence to silence opinions which dissented from those of the Obama administration in the lead-up to the 2012 election. Since the IRS scandal broke in 2013, the agency has been under the Congressional microscope in an effort to uncover and eliminate such practices.

Congressional Democrats including House Oversight and Reform Committee Ranking Member Elijah Cummings, Ways and Means Committee Ranking Member Sander Levin, and Representative Gerry Connolly have all pooh-poohed the controversy, saying that liberal groups were targeted also and that the notion of purely conservative targeting is merely a myth hatched by Republicans to besmirch the Obama administration. The Inspector General’s report concludes otherwise.

“TIGTA concluded that inappropriate criteria were used to identify potential political cases for extra scrutiny? Specifically, the criteria listed in our audit report. From our audit work, we did not find evidence that the criteria you identified, labeled “Progressives,” were used by the Internal Revenue Service to select potential political cases during the 2010 to 2012 time frame we audited,” George said.

According to the Washington Times, California Republican Darryl Issa, who chairs the House Oversight and Reform Committee, used the report to issue a pointed admonition to Democrats and the Administration, saying [Democrats] “..should stop trying to derail the investigation by defending IRS officials with distorted claims equating the systematic scrutiny of tea party groups with the more routine screening progressive groups received. As [the auditor] notes, tea party groups and progressive groups were treated very differently by the IRS.”

On April 9th, Issa’s committee will take up the matter of whether or not Lois Lerner, the former IRS official believed to be at the heart of the informational clog, should be held in contempt of congress. Lerner has been brought twice before the committee to testify, but has both thimes invoked her rights under the Fifth Amendment to avoid testimony. The Thursday vote will determine whether or not Lerner should be held in Contempt of Congress for her failure to cooperate.