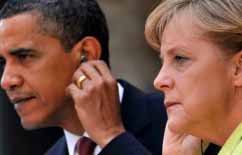 In a scene reminiscent of Sgt. Schultz in Hogan’s heroes, president Obama is now claiming that he had no idea his National Security Agency was eavesdropping on the phone conversations of German Chancellor Angela Merkel for several years.

German media reported that a government official claimed that President Barack Obama was told in 2010 by Gen. Keith Alexander, director of the NSA, that Merkel’s phone was being tapped and that the president allowed it to continue.

A follow-up report in the German magazine Der Spiegel, said the NSA’s tapping of Merkel’s cell phone first began in 2002 when she was leader of the German opposition party.

Following the explosive allegations, the NSA has come forward and said they never told Obama what they were doing with Merkel’s communications.

“Gen. Alexander did not discuss with President Obama in 2010 an alleged foreign intelligence operation involving German Chancellor Merkel, nor has he ever discussed alleged operations involving Chancellor Merkel. News reports claiming otherwise are not true.” NSA spokeswoman Vanee’ Vines said in a statement.

However, on Sunday the Wall Street Journal reported that the NSA stopped the program that involved intercepting the communications of Merkel as well as other European leaders after an internal White House review told the president of the extent of the surveillance.

On a phone call with Merkel last week, Obama reassured her that the US was not listening to her phone calls, the White House said.

The assurance was the result of allegations by a German official that American intelligence agencies have been monitoring the Chancellor’s cell phone.

Reuters reported that the German government has obtained information that the United States could possibly have monitored Merkel’s cell phone, causing her to call the president to demand immediate clarification.

Reuters went on to say Merkel told Obama in a strongly worded statement that if the allegations of surveillance on her had taken place it would indeed represent a “grave breach of trust” between close allies.

“She made clear that she views such practices, if proven true, as completely unacceptable and condemns them unequivocally,” the statement read.

“The United States is not monitoring and will not monitor communications of the Chancellor,” White House Press Secretary Joe Carney told reporters last week.

However, Carney statement did not say the NSA had never monitored her communications only that it was not occurring at this time. German intelligence officials are scheduled to meet with their American counterparts this week to ask about the surveillance programs.