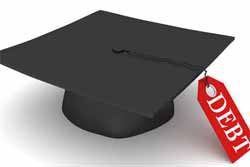 The surge in education loans have been a big problem in the recent past. They have always made up a large portion of America’s debt but have recently overpowered the citizen’s ability to access credit elsewhere for other purposes.

A study by TransUnion has been done to analyze the debt loads of many consumers and what they constitute. This was between the period of March 2005 and March 2014. The study findings indicate that amongst all age groups, balances brought about by student loans had way exceeded those of credit cards, personal and auto loans.

This was especially noticeable in young consumers. The study showed that in the year 2005, students in the age bracket of 20-29 had loans making up to 12.9%. But this surprisingly jumped to 36.8% in the year 2014. This has been at the expense of mortgage balances which have shrank to 42.9% from 63.2% among young consumers. Credit cards have also dropped to 3.8% from 5.1%, accounting for less of the total debt.

There have been plenty of factors in the housing sector as well as the economy that have led to the fall in home balances, therefore student loans are not necessarily the immediate cause of a drop in home balances in the recent past. However, this is not the only study that has suggested the student loans to be a contributing factor in the lowered levels of home ownership.

Charlie Wise, who is the vice president of TransUnion Innovative Solutions Group, said in a news release on the study findings said, “Our study clearly shows that the rapid rise in student loan debt for younger consumers has occurred while the shares of all other loan types except auto dropped, indicating that student loans may be crowding out most other loan types.” He continued and said, “Additionally, younger consumers have found during and soon after the recession that it is more difficult to gain access to credit cards and mortgages, further pushing the decline in those balances.”

The rise in higher education expenses is not only borne by young consumers. As the student loans increased to 7% from 2.8% of all consumers’ debt, those consumers aged 60 years and above also saw their education debt share rise to 1.8% from 0.5% in the period of the study. This could possibly be attributed to students asking their parents and grandparents to co-sign the loans they need for their college fees.